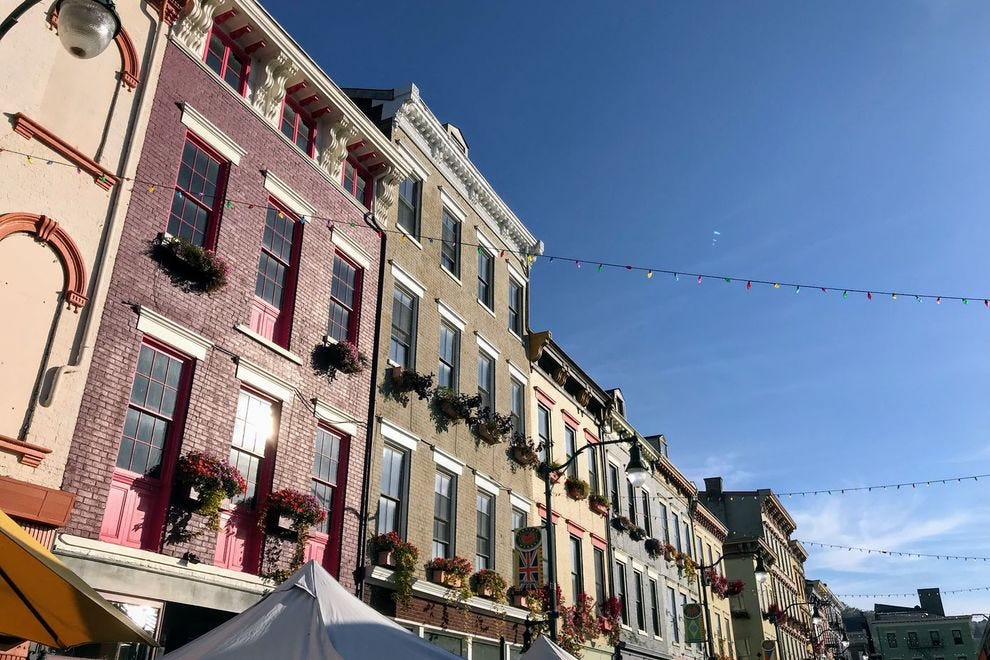 In 2001, riots caused Over-the-Rhine (OTR) to fall into disrepair. It took more than a decade for parts of the neighborhood to rebuild and become what it is today, a gentrifying place filled with diverse restaurants, bakeries, breweries, wineries, boutiques, bagel shops, coffee shops, music venues, an old-school arcade, cocktail bars, The Mini Microcinema, film fests, juice bars, a public swimming pool and parks.

Basically, OTR is the food hub of Cincinnati with Findlay Market representing the epicenter. Though the influx of development is beginning to reach oversaturation in certain parts, new independently-owned businesses (and a few chains) open monthly. Most businesses and residences are housed inside restored colorful Italianate structures built in the 1800s. And everything is clustered together, which makes it easy to hop from one place to another.

Whereas Vine Street contains the most eateries, Main Street, a few blocks away, offers a quieter yet still buzzy array of establishments. In recent years, many national publications have written about OTR’s scene, so this list reflects some of the worthwhile spots that don’t get covered as frequently and also some distinctive new places that have opened in the past year. However, you’d be hard-pressed to find mediocre food and drink in OTR. 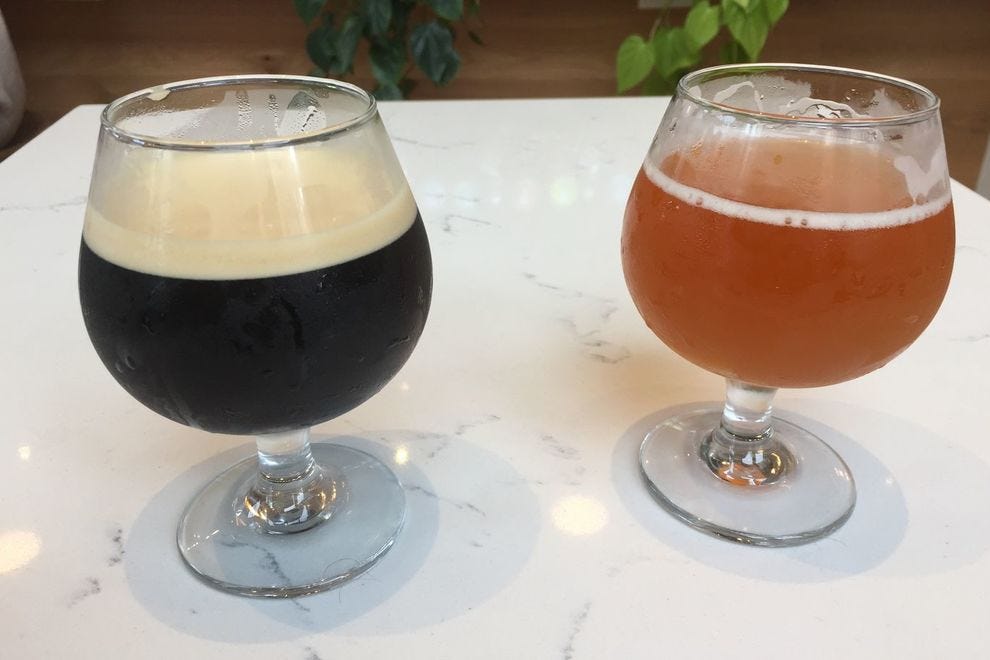 In 2014, Platform Beer Company opened in Cleveland, but in February 2019, they opened a sun-filled taproom on Main Street in OTR – their first foray into the Cincinnati market. The taproom barrel-ages some beers (Locoba stands for “local coffee barrels”), but mainly serves their brews on tap (try the hard seltzer) and sells them in cans.

The difference between Platform’s other tasting rooms (they also have one in Columbus) is Locoba offers a coffee program and an all-day food menu. They brew pour overs and have nitro coffee on tap from rotating roasters. Their all-day menu consists of breakfast, sandwiches, salads and dips; weekends mean brunch, including cocktails and bagels from OTR’s The Bagelry.

During the weekdays, they host happy hour, but on Sundays they have all-day happy hour, which makes for the happiest of days.

Since 2012, Sara Dworak has channeled her family’s Ukrainian heritage into Babushka Pierogies, selling them in markets and to restaurants. But in late 2018, she opened a walk-up window in OTR (the neighborhood has a lot of these) to vend specialties like Cincinnati chili-style pierogies and deep fried pizza ones (pizzarogies).

In March 2019, she opened Wódka Bar (pronounced “vodka”) – the only Slavic restaurant in OTR and one of few Slavic spots in the entire city – as a means to not only sell more pierogies but also 60 types of vodkas, including around 14 house-infused varietals.

The rest of the drink menu consists of Eastern European beers, as well as European wines and cocktails, like the cheekily named Russian Collusion, a more elegant take on a White Russian. Order a flight of vodkas along with food: kielbasa bowl, pierogies (of course), caviar in puff pastry and the Taste of Old Country board, featuring smoked herring, Polish oszczypek cheese, beet and horseradish pate, pickles and bread from neighboring Allez Bakery. 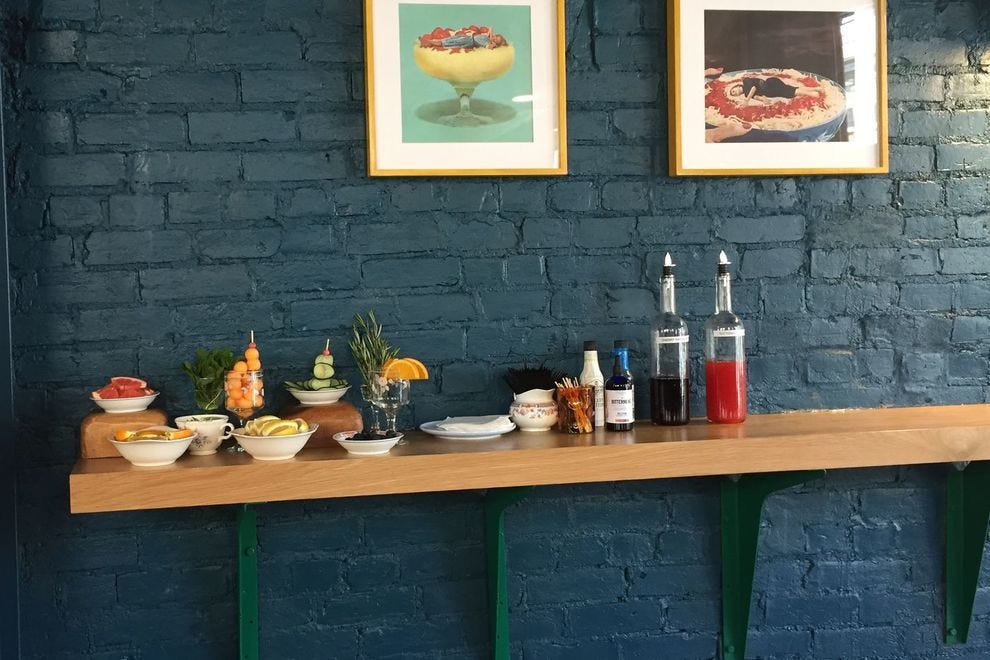 In June, Los Angeles via Cincinnati cocktail veterans Julia Petiprin and Catherine Manabat opened the slightly retro HomeMakers. Almost every day, instead of happy hour, they host Spritzer Hour. On Mondays, it lasts all day meaning select bubbles-filled cocktails are only $6.

On weekends, they set up a gin and tonic bar, replete with DIY skewers of fresh fruits and herbs, bitters and fruity simple syrups. The bar menu consists of several gin-, sherry- and vermouth-based cocktails (they make their own vermouth); a rare beer from Nicaragua; and foods like the Home Plate Special: double-decker sandwich, house-made pickles, Hamms beer and a shot of amaro.

They also make dips, finger sandwiches, a charcuterie board and salads. The bar itself is decked out in colorful shades, broken china pieces displayed under the bar top, vintage framed food photos and a Pac-Man cabinet. As the saying goes, “It’s your home away from home.” 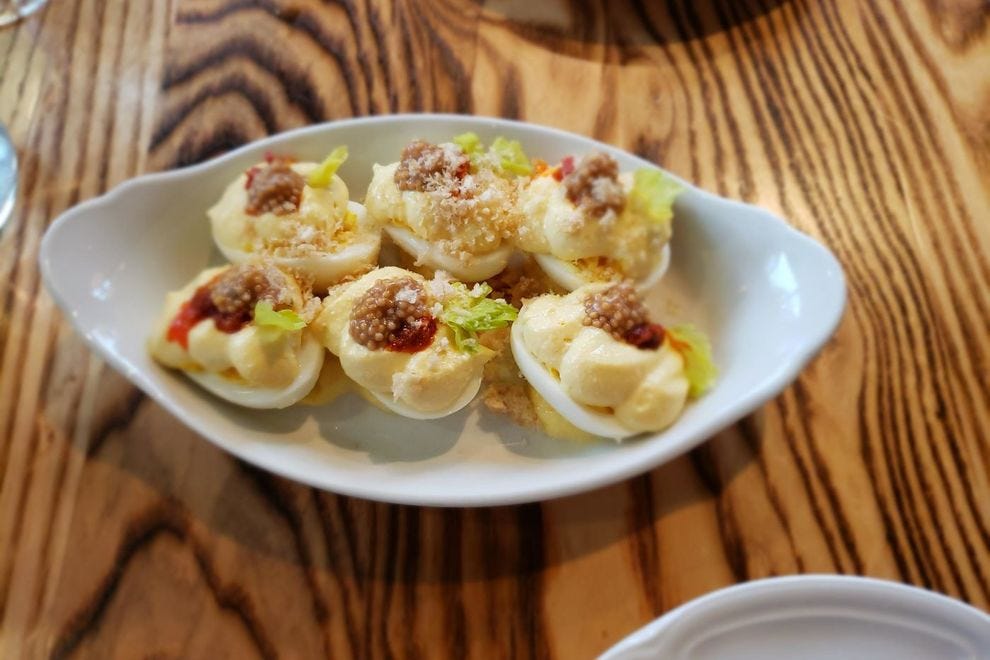 This upscale diner goes big – hence the “beast” in its title – with all their dishes, especially deviled eggs. Instead of just whipping eggs into boiled egg whites, Sacred Beast takes it a step further and leaves in the yolk from seven-minute eggs and tops them with the whipped egg mixture, pork rinds, Calabrian chili peppers and pickled mustard seeds.

The result is so decadent that you might not have room for one of their several enticing entrees, such as twice-cooked ribeye (available on Friday and Saturday), lemon ricotta pancakes, neckbone gravy with hashbrowns, “one big ass meatball” or a fried mortadella sandwich.

They also have a long list of cocktails, mocktails, wines, beers and coffee, and adding to the eclectic diner vibe, the bar area plays music from a rare reel-to-reel tape machine. 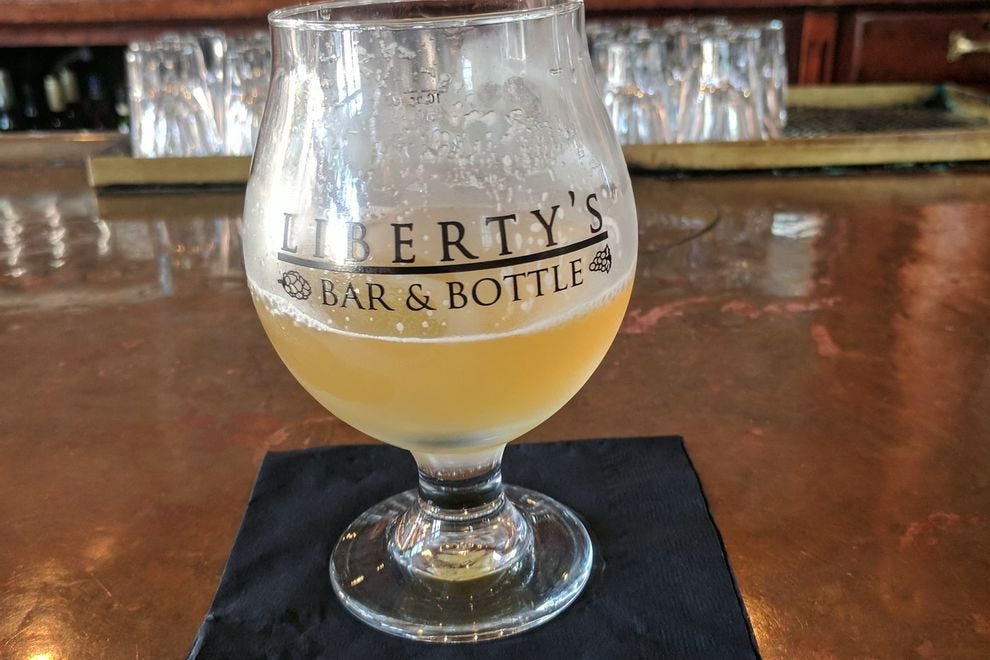 Among glasses of wine, pints of beer and cocktails, Liberty’s also offers half pours of wine and beer — Photo courtesy of Garin Pirnia

Located at the corner of Main Street and Liberty Street, the bar/bottle shop is one of the more low-key neighborhood bars – they usually opt for showing Netflix on their TV instead of sports and they allow dogs.

They have 20 rotating taps of local, regional and international beers and a robust list of wines by the glass. You can get half-pours (4 ounces) of most beers and wines, so you can try more things. The bottle part of the title denotes a small selection of carry-out wine and beer, some of which they have on tap. On Rosé Wednesday, patrons can sample rosé flights and rosé cocktails.

The shop also makes their own ginger beer, used in cocktails like the Liberty Mule ($5 during happy hour) and Gin-Gin Spritz. As for food, they serve a charcuterie board, but go across the street to Alabama Fish Bar for some fish and chips. 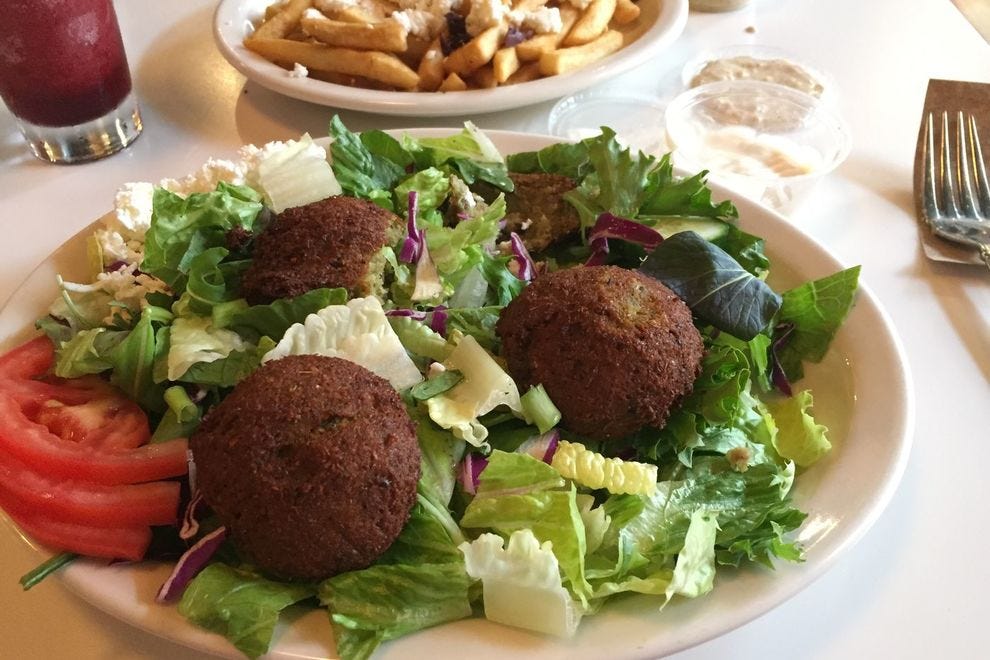 Though Aladdin’s is a chain of Lebanese-American restaurants founded in Ohio, the OTR location (one of three locations in Cincy) offers something that other locations don’t: a full bar.

At this Aladdin’s, you can order boozy slushies, Lebanese wine, sometimes $2.50 cans of local craft beer and cocktails like the Za’atarita (tequila, simple syrup, lime juice, mango nectar, lemon bitters, Jun Bug Probiotic Soda) or the Beirut Mule (bourbon, fresh mint, dried ginger, simple syrup, ginger beer and Arak). Sip the drinks at their indoor bar, outdoor bar (they have a nice patio, too) or in the dining room.

Their menu can be overwhelming – it’s 15 pages long – but they offer traditional hummus, falafel salad and more unusual foods like pizza pita (pitza), rolled pita sandwiches and za’atar fries with dipping sauces. Plus, they’re located next door to Platform, so it’s easy to visit both places in one stretch.

Longfellow and Other Room 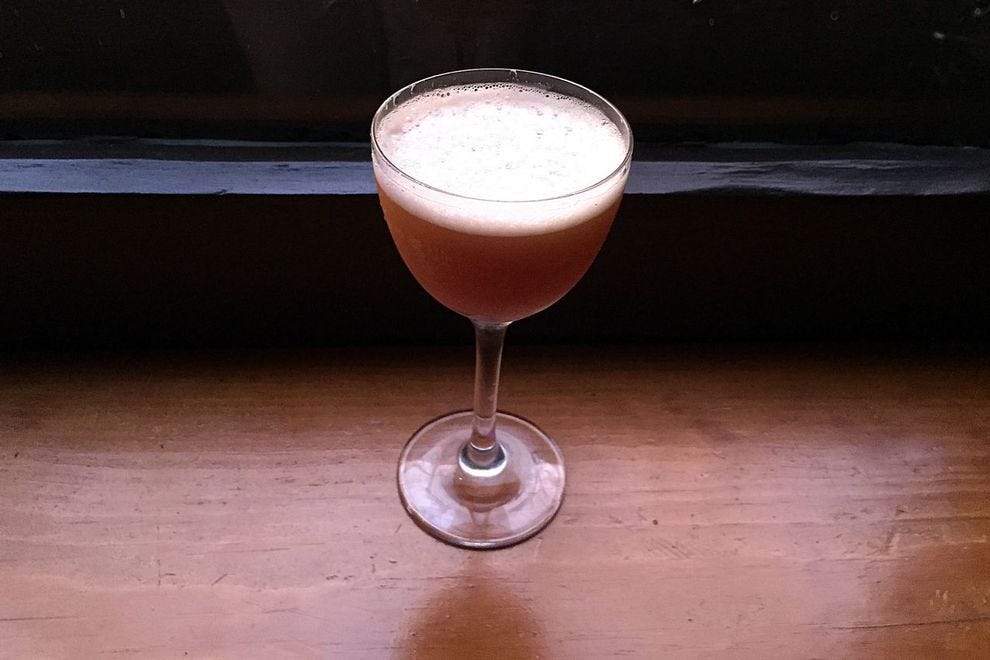 Dr. Jones, one of Other Room’s rum-based cocktails — Photo courtesy of Garin Pirnia

Longfellow is a bit of an oddity in the neighborhood. Last year for Halloween, they threw a Titanic-themed party. In June, they honored Prince on his birthday with purple drinks. The L-shaped cocktail/beer bar has a food menu with vittles like a scrap sandwich (baguette, slicer scraps, lettuce, Dijon mustard, pickled shallots and pickled peppers) and cottage cheese dashed with pepper.

In 2019, they opened the adjoining Other Room, a 10-seat bar featuring Ohio’s largest selection of rum, offering more than 100 kinds. They pour familiar Caribbean rums but also rare rums (or rhums) from places like Antigua, Guyana, Guadalupe, Martinique, St. Lucia and St. Croix. People can taste the rum via two- or four-ounce pours and in cocktails. Other Room is only open four nights a week, but it’s enough to transport you to the tropics. 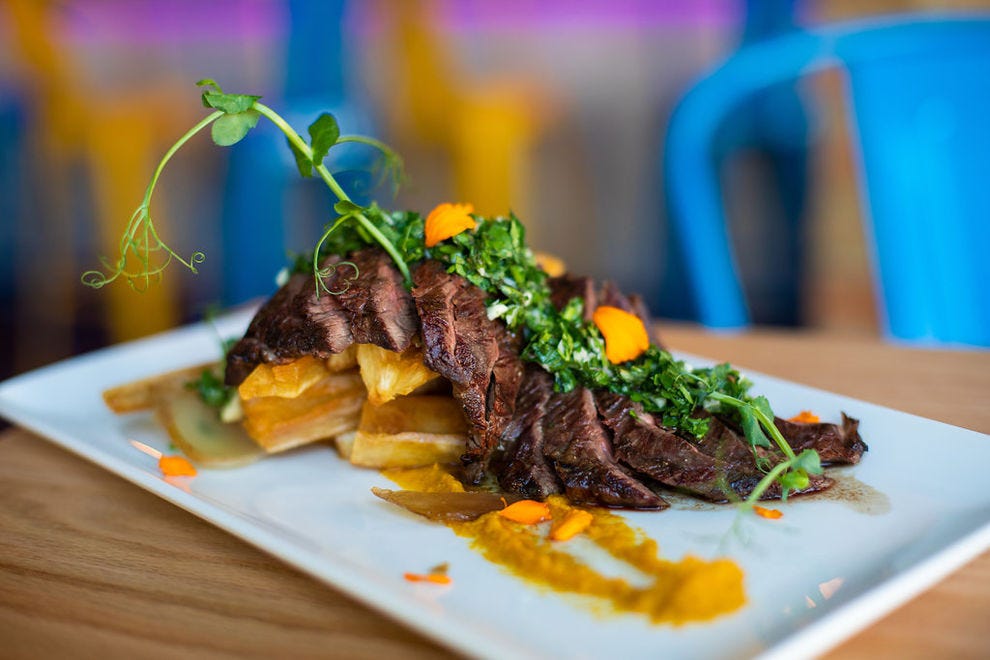 For entrees, some favorites are the grilled skirt steak with chimichurri (churrasco con chimi) and the Puerto Rican-style pork belly (lechonchetta con mofongo). Pair the food with one of their bright, tropical cocktails, like the Hurricane Maria – $1 of each sale gets donated to hurricane relief. And save room for the after-dinner El Ritual shot, which is rum mixed with coffee and brown sugar and served with a lime wedge. 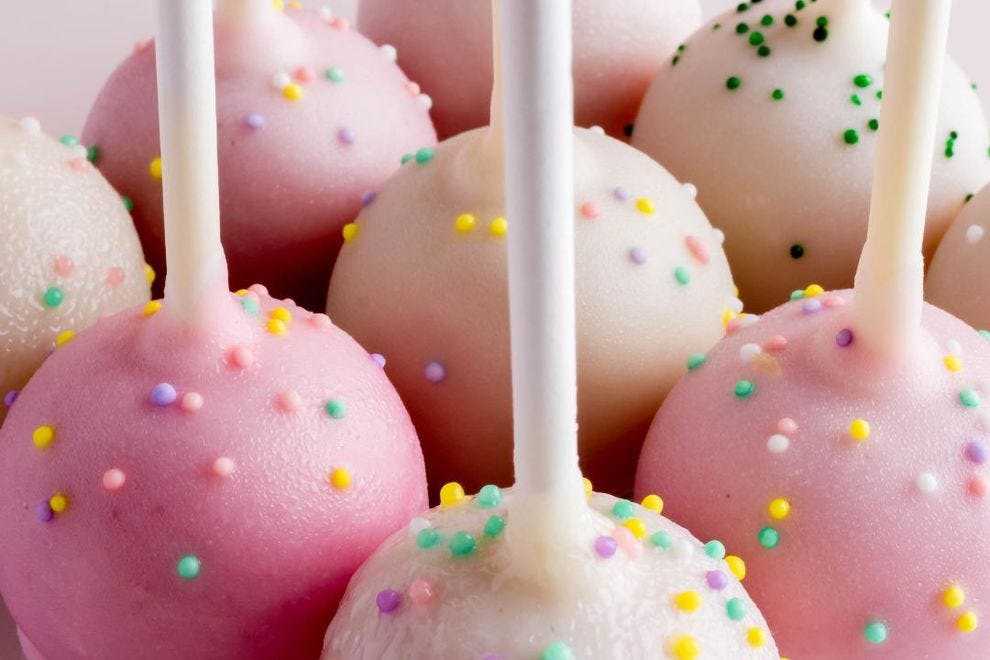 Before starting Sweet Petit in 2009, owner Taren Kinebrew served in the Army National Guard and spent time in the corporate world. But she’s clearly found her calling in designing and baking bite-sized desserts and full-size cakes.

She makes macarons, cake pops, brownies, red velvet cookies, mini cupcakes and cakes like strawberry cheesecake, and double chocolate cake. She sells her goodies at her storefront but she also caters events with a custom dessert bar, in addition to teaching baking classes. 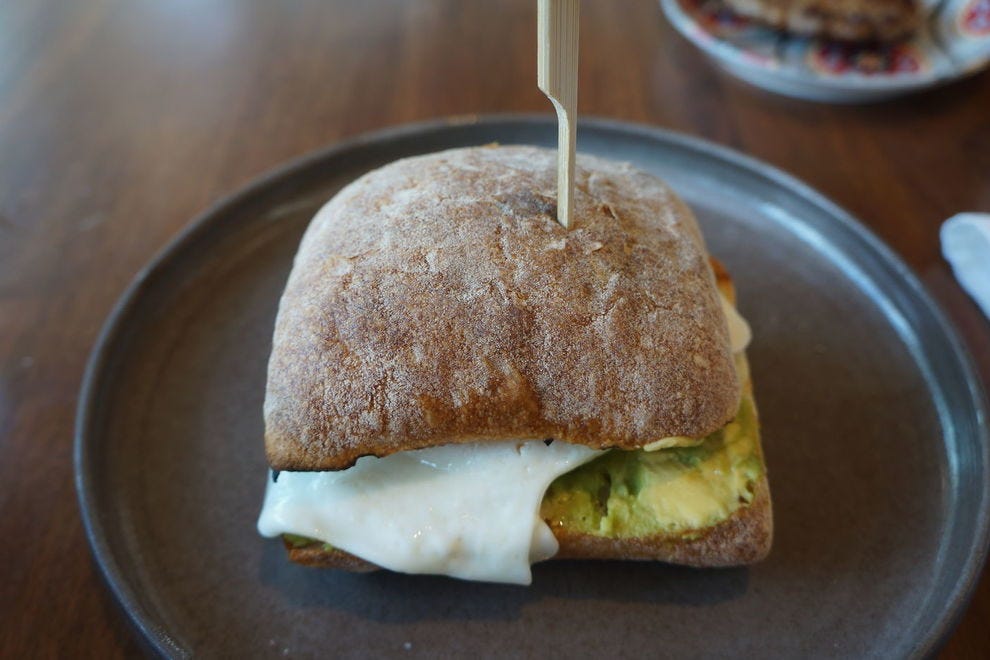 1215 Wine Bar opened on Vine Street in 2012 and its sister restaurant, Pleasantry, opened a few blocks away in 2016. Daniel Souder and Joanna Kirkendall own both places, which focus almost exclusively on natural and biodynamic wines.

Both places offer the natural wines, but 1215 highlights flights – tasting notes includes descriptive phrases like “peppered cherry juice” and “dryer sheets’ – whereas Pleasantry procures more wines by the bottle than the glass. And at 1215, you can purchase bottles to-go.

Enjoy a tropical island retreat in the heart of San Diego

Sweden's tallest mountain has shrunk, thanks to climate change