Some of the best and most inexpensive places to visit in August with cooler weather. Buzz60’s Taisha Henry has the story.
Buzz60

Many of Europe’s time-warp houses — sights that bring you back to a bygone era — get only a few thoughtful travelers, overshadowed by big-name museums. Some of the ones I highly recommend may make people say “Huh!?” But they’re the sights that might just make your day.

For example, Glasgow’s Tenement House in Scotland offers a chance to drop into a perfectly preserved, 1930s-era, middle-class residence. The National Trust for Scotland bought this otherwise ordinary row home, located in a residential neighborhood, because of the peculiar tendencies of its former owner, Agnes Toward (1886–1975). For five decades, she kept her home essentially unchanged. (She also was a late adopter, making the leap to electricity only in 1960.)

The kitchen calendar is still set for 1935, canisters of licorice powder (a laxative) still sit on the bathroom shelf, and her piano, once the room’s entertainment center, hasn’t budged. As visitors explore the four little rooms, volunteers explain the utility of the iron stove, the importance of that drawer full of coal and why the bed is in the kitchen.

Though much more well-known, the Jacquemart-André Museum in Paris is another place I enjoy visiting. This was the lavish home of a wealthy, art-loving, 19th-century Parisian couple, Edouard André and his wife Nélie Jacquemart. They had no children and spent their lives and fortunes designing, building and then decorating this mansion with chandeliers, gilded trim and exotic curios.

The couple had a mutual passion for art: The place is strewn with paintings by Rembrandt, Botticelli, Uccello, Mantegna, Bellini, Boucher, and Fragonard. Stepping into the Versailles-like Grand Salon, it’s easy to imagine the sumptuous parties held here, with up to 1,000 guests.

In London, quirky Sir John Soane’s Museum is a gem. A professor of architecture at the Royal Academy, Soane created his home to be a place of learning, cramming it floor to ceiling with ancient relics, curios and famous paintings, including Hogarth’s series on The Rake’s Progress.

Soane even purchased the Egyptian sarcophagus of King Seti I (Ramesses II’s father) after the British Museum turned it down — at the time, they couldn’t afford the £2,000 sticker price. In 1833, just before his death, Soane established his house as a museum, stipulating that it be kept as nearly as possible in the state he left it. I always leave wishing I’d known the man.

Some time-warp houses do let you get to know their inhabitants — at least a little. In Sicily’s capital city Palermo, Italy, Palazzo Conte Federico offers a rare opportunity to see museum-worthy ancestral relics in one of Palermo’s oldest buildings — and meet a Sicilian aristocrat at the same time. 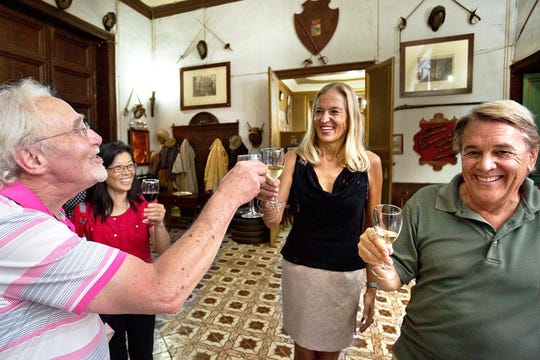 The palace has been home to generation upon generation of Count Federico’s family, which can be traced back to Holy Roman Emperor Frederick II. But now that the perks of nobility no longer pay the bills, the family has opened the doors of their elegant and extremely lived-in mansion to the paying public.

When you take a tour, the charming Countess Alwine, or one of her sons, enthusiastically shows opulent rooms with Baroque ceiling frescoes and ancient weapons, as well as photos and paintings of noble ancestors. The current count, Alessandro, may show off his vintage race car.

You can see one of the few remaining parts of the city wall as you climb into the 12th-century Arab-Norman tower. You can even stay overnight in the palazzo: Sons Nicolò and Andreas manage apartment rentals on a separate floor.

Nestled in England’s cozy rural Cotswolds district is one of my favorite noble manor houses: Stanway House, home of the Earl of Wemyss. 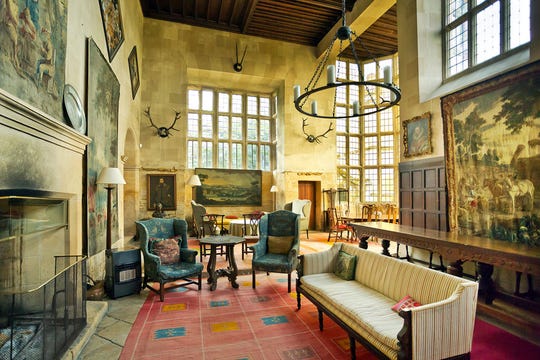 At Stanway House in England’s Cotswolds district, you can visit the grand home of the Earl of Wemyss. (Photo: Dominic Arizona Bonuccelli)

The earl, the 13th in a line that stretches back to the 1200s, welcomes visitors two days a week in the summer. Walking through his manor house offers a surprisingly intimate glimpse into England’s aristocratic lifestyle.

You’re free to wander around pretty much as you like — and the earl is often roaming about as well. On the grounds, the 14th-century tithe barn predates the manor. It was originally where monks — in the days before money — would accept one-tenth of whatever the peasants produced. While it’s no longer used to greet motley peasants and collect their feudal “rents,” the lord still gets income from his vast landholdings and hosts community fêtes in his barn.

Visiting Europe’s time-warp homes connects you intimately with both other time periods and other cultures, helping you imagine the past. While you can’t live like these mostly lavish locals, it’s an opportunity to see an authentic side to the places you came to visit.

Rick Steves writes European travel guidebooks and hosts travel shows on public television and public radio. Email him at rick@ricksteves.com and follow his blog on Facebook.