“People around here eat, breathe and drink the Steelers,” says Jerome Gibas, general manager of Kennywood, a traditional amusement park just outside Pittsburgh. His statement may sound hyperbolic, but if anything, it  might understate the fanaticism that the franchise engenders in the football-crazy city.

So what do you get when you combine two of Pittsburgh’s most beloved icons? You get Steel Curtain, a wild, record-breaking, Pittsburgh Steelers-themed roller coaster that recently opened at the park. With nine upside-down inversions — more than any other coaster in North America — it’s safe to say you’ll flip for the ride.

With its bold gold and black colors and football-shaped and adorned seat backs, it’s pretty hard to miss the ride’s gridiron connection. Any doubt is erased, however, when visitors encounter the huge “Steelers Country” sign that welcomes them to the new land in which the coaster resides.

A bit taller than Phantom’s Revenge, the hypercoaster that sits at the other end of the property, the two rides dominate Kennywood’s skyline. The long and linear Steel Curtain, known as an “out and back” coaster, cuts a swath over the midway and the park’s lagoon. Rising 220 feet, the sight of the ride’s imposing structure gets pulses racing and palms sweaty even before the sounds of its passengers’ shrieks and screams reverberate in the park.

Record-setting coasters: Flip out on the 12 U.S. roller coasters with the most inversions

Although the coaster features a record number of inversions, its trains do not use over-the-shoulder restraints. Instead, they include seat belts and a single ratcheting restraint that secures riders’ laps and shins. That leaves passengers largely unencumbered and exposed in the low-slung cars.

After conducting a safety check, ride operators wearing striped referee shirts give the thumbs-up sign to clear the train for takeoff. Just before they leave the station, passengers hear a brief audio spiel from Bill Hillgrove and Tunch Ilkin, the radio play-by-play announcers for the Steelers. The chirpy duo also greet them when they return to the station.

Because the long-established park offers scant room for expansion, Kennywood had to remove its log flume ride, Log Jammer, to make way for Steel Curtain. In order to wedge the extreme coaster into the limited footprint, its lift hill is designed at an unusually steep 50 degrees. (Most coasters have an angle of ascent closer to 30 degrees.) Interestingly, the gold structure supporting the top of the lift hill and other sections of track looks vaguely, if unintentionally, like an oversize goalpost at Heinz Field.

Latching onto the lift chain, the train proceeds slowly at first and then picks up speed as it climbs the long, steep lift hill. Gibas explains that the variable speed drive is used as a safety precaution, and that the trains rev up when they have cleared all relays and sensors. The effect heightens anticipation as the train click-click-clicks up and suddenly— whoa! — speeds up as it nears the apex.

Taking a little dip, passengers are almost immediately sent into a barrel roll at a precarious 197 feet in the air. It is the world’s tallest inversion, and it’s harrowing to turn upside down some 20 stories above terra firma. But there isn’t much time to fret as the train plummets down a dive drop to the ground and then navigates up a huge loop that morphs into a roll.

Steel Curtain features a record number of inversions (nine), but its trains do not use over-the-shoulder restraints. Instead, they include seat belts and a single ratcheting restraint that secures riders’ laps and shins. (Photo: Palace Entertainment)

Unlike most “out and back” coasters, there are almost no straight sections of track on Steel Curtain. It’s one flip-flopping inversion after another. One of the elements, known as a “zero-G stall,” sends passengers flipping in one direction where they momentarily hang upside down while racing forward, and then flops them right side up in the other direction.

It all happened so quickly and was so disorienting, it was difficult for me to maintain my bearings.

Steel Curtain is missing another “out and back” coaster characteristic: airtime. Except for one brief pop out of my seat, there were scarcely any negative-G sensations. This is a thrill machine designed for intense speed, tight turns and inversions.

Why all the upside-down elements?

“Whenever we are going to invest so much money in an attraction, we want it to have something that sets it apart,” Gibas says. The park settled on delivering a record-breaking number of inversions and the tallest inversion. It works well in the park, Gibas notes. Other than the three inversions that one of its other rides, Sky Rocket, dishes out, none of Kennywood’s other coasters include any.

Gibas says the park’s overseers were also emboldened by the advances that ride manufacturers have made in coaster design.

“With today’s technology, inversions aren’t as rough on people,” he says. “It’s smooth going in and coming out of them.” 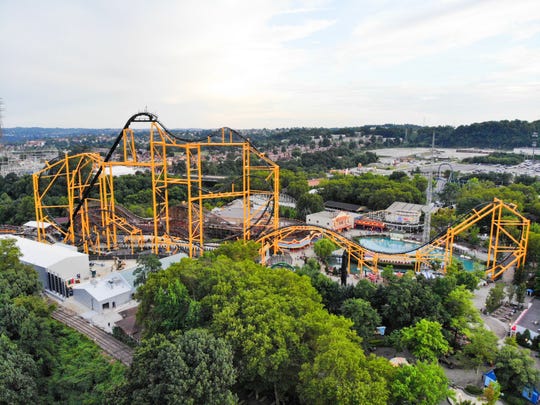 The long and linear Steel Curtain is known as an “out and back” coaster. (Photo: Palace Entertainment)

Indeed, some coaster inversions can feel like getting tackled by “Mean” Joe Greene in his prime. Despite the barrage of inversions, twists and turns, the ride experience on Steel Curtain remains solid. Emerging from the coaster, wobbly passengers will know they’ve been on an extreme, world-class thrill machine, but they won’t be any the worse for wear. And they’ll be ready to take another run at the Steel Curtain.

Construction of the coaster was delayed due to a challenging winter filled with rain. It opened later than planned in mid-July along with a retail shop selling Steelers and Kennywood gear. Later this summer or in early fall, the park will open football-themed midway games and the End Zone Café and Tailgate Patio. Offering kielbasa, burgers and other game-day fare, visitors will be able to chow down while a Jumbotron plays Steelers highlights.

In May, the park will complete Steelers Country with the opening of the Steelers Experience. The large, indoor building will feature a number of interactive challenges such as agility drills and a 40-yard dash. Visitors will also be able to simulate scoring a touchdown and doing a touchdown dance. Getting tackled by “Mean” Joe Greene will NOT be among the experiences.