A towering cruise ship rammed into a dock and a tourist riverboat on a busy Venice canal on Sunday morning, injuring five people, officials said. The collision sparked new calls for placing restrictions on cruise ships in the famed city. (June 12)
AP, AP

An Italian official announced this week Venice would begin rerouting cruise ships away from its historic city center.

Some ships will be redirected to dock at other terminals in the lagoon, including Fusina and Lombardia, starting next month, Danilo Toninelli, the Italian minister of infrastructure and transport, said at a Wednesday transport committee hearing, according to CNN and The Financial Times.

By next year, he said he expects a third of cruise ships will be rerouted.

“We’ve been talking about big ships for 15 years and nothing has been done,” Toninelli said at the hearing, according to CNN. “These floating palaces will start to go elsewhere.” 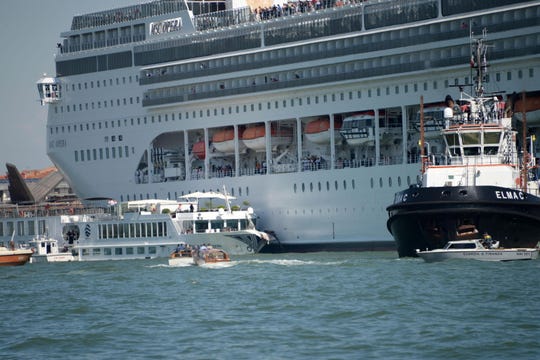 The cruise ship MSC Opera is seen after the collision with a tourist boat, in Venice, Italy, June 2. The cruise ship smashed into a dock located on the Giudecca Canal in Venice. (Photo: Andrea Merola, EPA-EFE)

The longstanding controversy over safety and the environmental impact of cruise ships in Venice’s busy Giudecca Canal came to a head after a 65,500-ton cruise ship crashed into a much smaller riverboat docked along the canal on  June 2.

The dramatic Venice collision injured five people. Video showed the MSC Opera cruise ship blaring its horn as it bore down on the riverboat and crashed into the cement embankment. The cruise ship’s owner, MSC Cruises, said the ship was about to dock at a passenger terminal when it had a mechanical problem and was unable to halt its momentum.

Weeks later, another cruise ship came close to smashing against a yacht in the Venice lagoon amid stormy weather. The Costa Deliziosa ship was leaving Venice port on July 7 when it was caught in strong wind and hail, and tugboats struggled as they tried to pull it away from the yacht.

The Costa Deliziosa cruise ship nearly smashed into an esplanade and a yacht in Venice on Sunday.
AP/Roberto Ferrucci

Safety and environmental debates were renewed in full force following the incidents, with some groups asking for an outright ban on ships in the lagoon.

Venice is one of the world’s top ports of call for cruise ships, with twice the traffic of any other Adriatic port.

Last year, cruise ships traversed St. Mark’s basin and the adjacent Giudecca Canal 1,004 times, carrying 1.56 million passengers. That is down about 12% from seven years ago, both in terms of passenger numbers and passages.

Many cruise ship opponents back a plan to put a terminal at an opening to the lagoon between the exterior Venice Lido island and the northern Cavallino promontory. The plan received official approval two years ago and never advanced for bureaucratic reasons, but would present cruise companies with the logistical issue of how to transfer passengers into Venice. 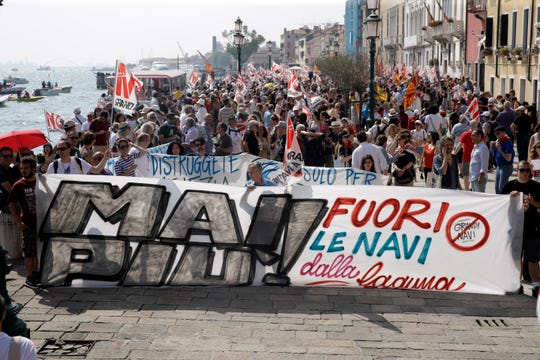 People march during a demonstration against cruise ships being allowed in the lagoon, in Venice, Italy, June 8, 2019. (Photo: Luca Bruno, AP)

“Probably the fact is, there is no solution,” veteran environmental activist Silvio Testa told The Associated Press in June. “All of the solutions proposed are either unacceptable to the cruise companies and the operators who work around the port. Or they are unacceptable to those who want to protect the environment.”