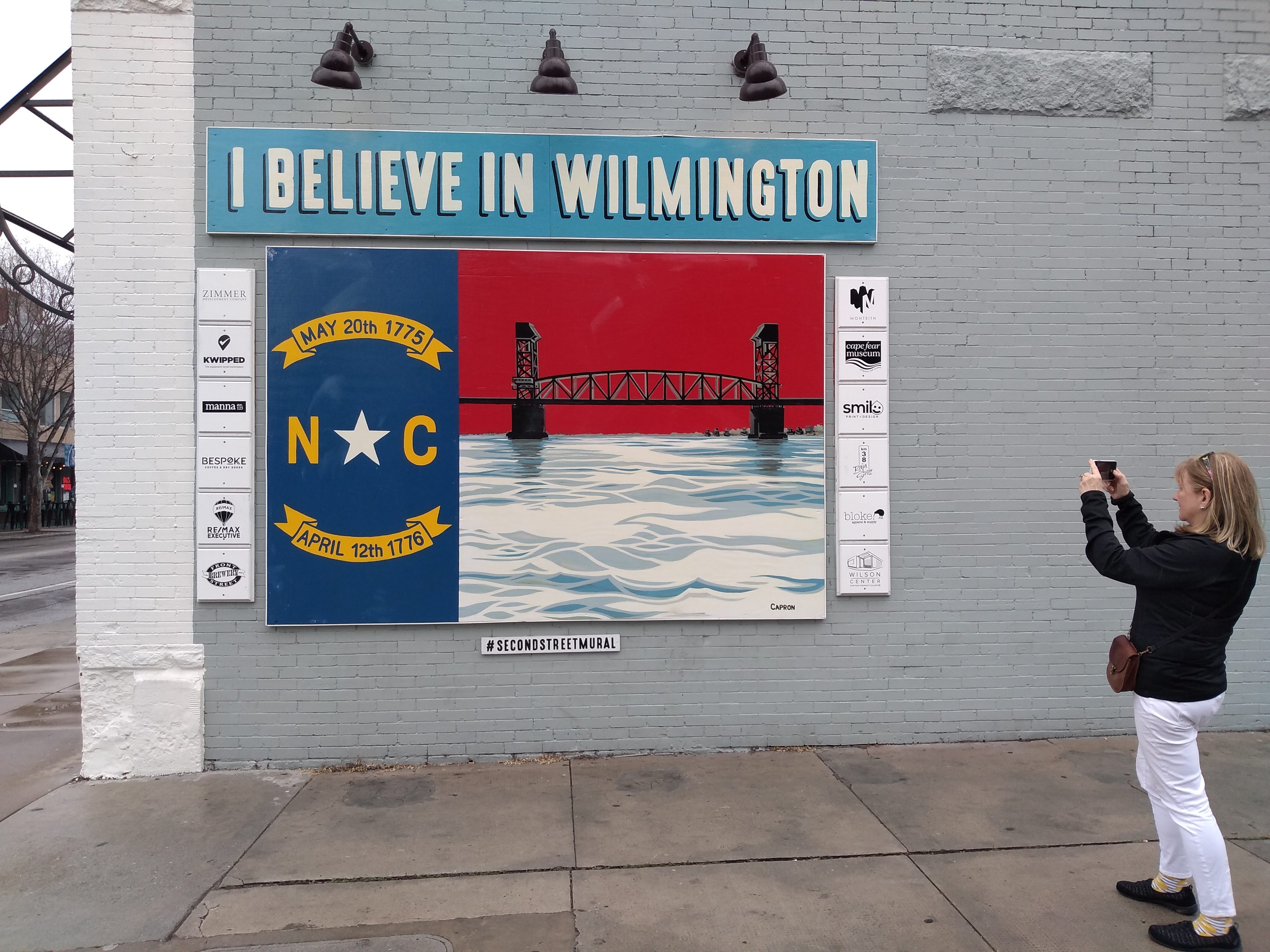 Step into the phone booth-size Hurricane Simulator at the North Carolina Aquarium at Fort Fisher, and for $2 for a one-minute session you can feel what a 78 mph gale – the equivalent of a Category 1 hurricane – is like.

Learning from experience is key. Wilmington and its string of beaches were evacuated and largely cut off Sept. 11-18 by slow-moving Florence’s tidal surges and heavy rains followed by flooding of the Cape Fear River, which Wilmington faces. But the eighth-largest metro in North Carolina recovered fast enough to stage its usual holiday events. Beaches show little sign of hurricane erosion or related damage. Cranes and scaffolding downtown are in place for new construction, not repairs.

That’s great news in an area where tourism is an economic driver. While less known nationally as a Southeast coastal destination than Savannah, Georgia, or South Carolina’s Myrtle Beach or Charleston, it is also less crowded and less hectic. Based on federal per diem reimbursement rates, Wilmington is also less pricey.

Wilmington’s vibrant downtown includes a 194-block historic district less congested than those in Charleston or Savannah. Wilmington (founded in 1732) has more history than Myrtle Beach and the Outer Banks communities, and has less over-the-top commercialism than either. Unlike Savannah, Wilmington’s beach islands are just a bridge away.

A dynamic dining scene is fueled in part by the Cape Fear area’s allure as a low-cost alternative to Hollywood for movies and TV series: Both “Dawson’s Creek” and “One Tree Hill” shot frequently in 67-acre Arlie Gardens, the romantic landmark facing the waterway near Wrightsville Beach – where Florence landed. The garden was closed for 45 days and number of its famed azaleas were lost but the ancient live oaks, native to the region, came through fine. Shrubs have been replaced and Arlie’s 100,000 tulip bulbs, pulled last summer, have been replanted.

The city-owned Municipal Golf Course, a 1926 Donald Ross-designed classic about 3 miles inland from the waterway, reopened within a month after Florence.

Experience matters. So does elevation.

Wilmington straddles a long and narrow peninsula dangling between the Cape Fear River and the Atlantic Ocean. The historic downtown, 20 to 50 feet above the Cape Fear waterline, stayed largely intact through Florence.

This “Port City” was once a hub where oceangoing freighters connected with roads and rail lines. The railroads pulled out in the 1960s and commercial wharves moved downstream to handle deep-draft vessels. Wilmington’s low-lying river docks, tracks and warehouses gave way to marinas, a 1.7-mile riverwalk and high-rise hotels and condos.

The wide wooden walkway, prime for strolling, rivals the beaches for recreational use. The west bank of the river looks like a wetland preserve, but it used to hold bustling docks. Rusted boilers from abandoned ships can be glimpsed among the reeds.

Downtown, near Market Street, the Battleship North Carolina rears majestically across the marshes. The enormous World War II veteran has weathered hurricanes since its permanent docking in the early 1960s. In 2016, construction began on a metal dam surrounding the ship’s deteriorating hull; water between the dam and ship can be lowered to make repairs possible. A free-admission boardwalk also closely surrounds the ship, allowing for boggling visuals hard to squeeze into photos.

The 15 or so low-slung blocks around Market Street offer a heady mix of boutiques, bars and restaurants. Tourist standouts include the Black Cat, a novelty store on Market (buy an Edgar Allan Poe lunchbox or sign up for a haunted Wilmington tour) and the Italian Gourmet Market on nearby Front Street (canned delicacies, fresh chilled cannoli and frozen ravioli), where John Travolta was a regular customer when making “Domestic Disturbance” in town in 2001.

Enjoy an easy stroll, take a horse-drawn carriage ride or get your bearings on the free downtown bus.

Many eateries and bars feature street tables. Order a couple dozen oysters at Bourbon Street or sip a beer outside Rebellion (a framed photo of visiting actor Bill Murray hangs in the men’s room).

A statewide restriction on film incentives five years ago hurt the town known as “Hollywood East.” Many filmmakers decamped for states offering better deals, and EUE/Screen Gems Studios, a player in more than 400 movies, shows and ads shot in the area, was largely mothballed. However, enough equipment and tech support is in place to keep Wilmington open for film business.

There are walking tours of key movie locations; filmed-in-Wilmington websites also list them.

One popular photo-op stop is Hell’s Kitchen, a bar and grill that appeared in “Dawson’s Creek” as well as “One Tree Hill” (as the Swinging Donkey Bar).

It’s on Princess Street across from Manna, which just received AAA Four Diamond status for the fifth consecutive year. The small and upscale restaurant’s menu – like many in Wilmington – emphasizes area-sourced fare. Manna has a small bar, and huddled there on a Friday in late February were actresses Jennifer Beals and Virginia Madsen. They were in town for the filming of the “Swamp Thing” series slated to stream on DC Universe this year.

Manna owner Billy Mellon is well-regarded locally for two unusual creations. One is the “Beggars Can’t Be Choosers” Sunday evening,  bar-only menu with $9 small-plate offerings simply listed as Veggie, Seafood, Meat, Mystery and Sweets. You get whatever the chef makes, no substitutions. What started as a cooler clean-out now has a life of its own.

Mellon’s other chaos-inspired touch is around the corner, on the wall of his building. It’s a large mural: a tweak on the state flag that shows Cape Fear whitecaps just below a black-on-red silhouette of Wilmington’s iconic U.S. 74 bridge. A placard above it reads “I believe in Wilmington.”

It has become a prime photo op for locals accustomed to random visits by hurricanes and movie stars.

Upcoming events in Wilmington area include:

• Wilmington Wine and Food Festival, May 16-19 at the historic Bellamy Mansion. wilmingtonwineandfood.com

Wrightsville Beach – where Florence made landfall last September – is along Wilmington’s 25-mile or so oceanfront that includes Carolina, Kure and Fort Fisher beaches to the south. All have dealt with worse storms.

Wrightsville’s 150-room Blockade Runner Beach Resort is open for business, with repairs completed on 80% of all the rooms and public areas. It was built in the 1960s to replace an earlier resort and general manager Nicholas Montoya says, “We are mindful of the tradition of hurricanes here; we were closed from Hurricane Diana in 1984 and since then have trended toward preparedness.”

The resort’s beachfront, originally just feet from the hotel patio, has been considerably widened over decades through renourishment programs. The hotel’s dunes and shore escaped ocean-surge damage.

Both resorts had plans in place for potential hurricanes. Insurance policies for business interruption made for faster recovery.

Rain damage at both places primarily affected ground floors, but repairs brought refurbishments. The Blockade Runner’s restaurant was completely redone, with new floors, ceilings, wall murals and a new outdoor boardwalk. The ballrooms, restaurant and lobby were redone at the 164-unit Shell Island, according to general manager Dara Newberry.

Newberry said that while repeat customers are aware of Shell Island’s recovery and refurbishments, discounts are likely for the shoulder season that continues through Memorial Day.

That’s when high season begins for tourism – as does the watch for 2019 hurricane season.