He’s one of the few who knows what it’s like to fly with falcons, and the views are breathtaking.
Animalkind, USA TODAY

A man spotted and tweeted a video of two falcons his fellow passengers brought on a recent flydubai flight from Dushanbe, Tajikistan, to Dubai, United Arab Emirates. His tweet went viral, though bringing these animals aboard in the Middle East isn’t atypical at all.

The airline told USA TODAY in a statement: “Please note that falcons are important to the culture of the (United Arab Emirates), and we regularly welcome our feathered friends on board.”

CNN reports that hunting with falcons (falconry) is a centuries-old tradition, and because of its importance to Middle Eastern culture, falconry has been recognized by the United Nations Educational, Scientific and Cultural Organization.

“Falconers regard themselves as a group and may travel weeks at a time engaging in the practice, while in the evenings recounting stories of the day together,” a UNESCO entry reads. “They consider falconry as providing a connection to the past, particularly for communities for which the practice is one of their few remaining links with their natural environment and traditional culture.” 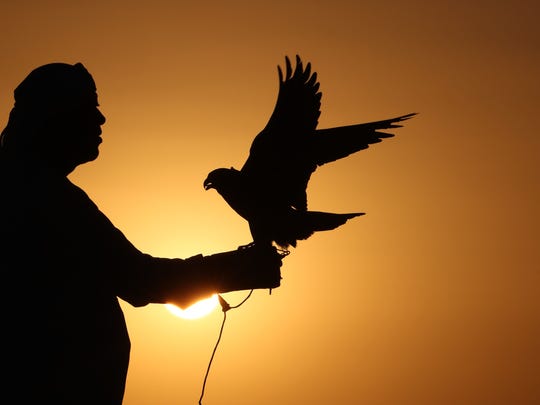 A falcon enthusiast trains a falcon during the 4th International Festival of Falconry in the Ramah Area of al-Ain in the United Arab Emirates Dec. 7, 2017. (Photo: KARIM SAHIB, AFP/Getty Images)

flydubai offers guidance specifically about falcons on its website, noting that bringing the animals aboard means seeking special approval: “Generally, you’ll not be allowed to carry any animals onboard our flights in hand baggage or checked baggage. You may be able to carry falcons onboard in hand baggage but this requires special prior approval. Please contact our customer support team for more details.

China's Kunlun in talks with U.S. over Grindr: filing