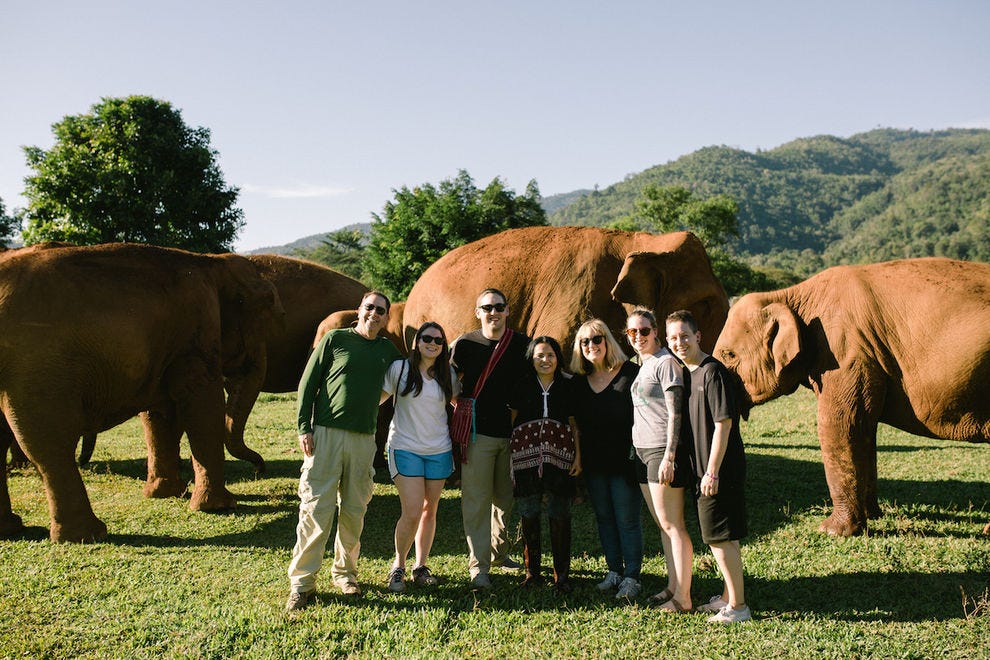 Volunteering at Elephant Nature Park (ENP) in Thailand, the premier sanctuary for rescued elephants, has been at the top of my bucket list for years.

After sobbing through watching Love and Bananas, a can’t-look/can’t-look-away documentary about the ongoing efforts of ENP founder Lek Chailert to stop the abuse of Asian elephants for tourism, my husband and I realized it was time to put our money where our mouths were, and we headed to Chiang Mai with our kids and their partners over Christmas vacation.

You can visit ENP for a half day or full day, but there is nothing like settling into this beautiful space as a volunteer, and waking up to the sound of elephants trumpeting. For less than $400/week per person, you get comfortable accommodations, three delicious and plentiful vegan buffets a day and joyful, once-in-a-lifetime experiences that just may move you to tears.

You also get quite an education. 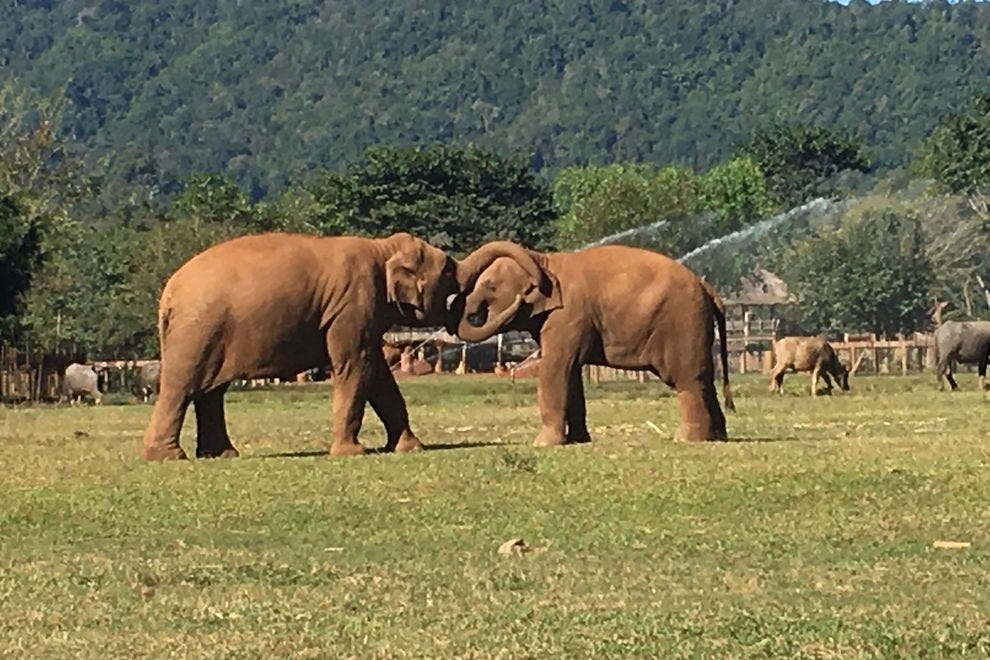 It turns out that 10 million tourists ride elephants in Thailand every year. Everywhere you go, there are ads for elephant rides, and there’s even an annual elephant festival filled with pageantry and performances. You can see the animals have a tug-of-war and a mock battle.

But the part no one sees is the abuse every single one of these elephants has undergone in order to make them perform.

In fact, there is an actual ceremony, called “crushing,” which is all about the torturing of baby elephants to break their spirit and make them submissive to humans. Every elephant performing in any way has been through this.

“There is so much suffering for a selfie,” sighed Chailert. “Taking an elephant ride or attending a show with performing wild animals is supporting cruelty.”

Chailert doesn’t blame anyone for this, though. Instead, she’s trying to educate everyone – from tourists to the government to elephant owners themselves. 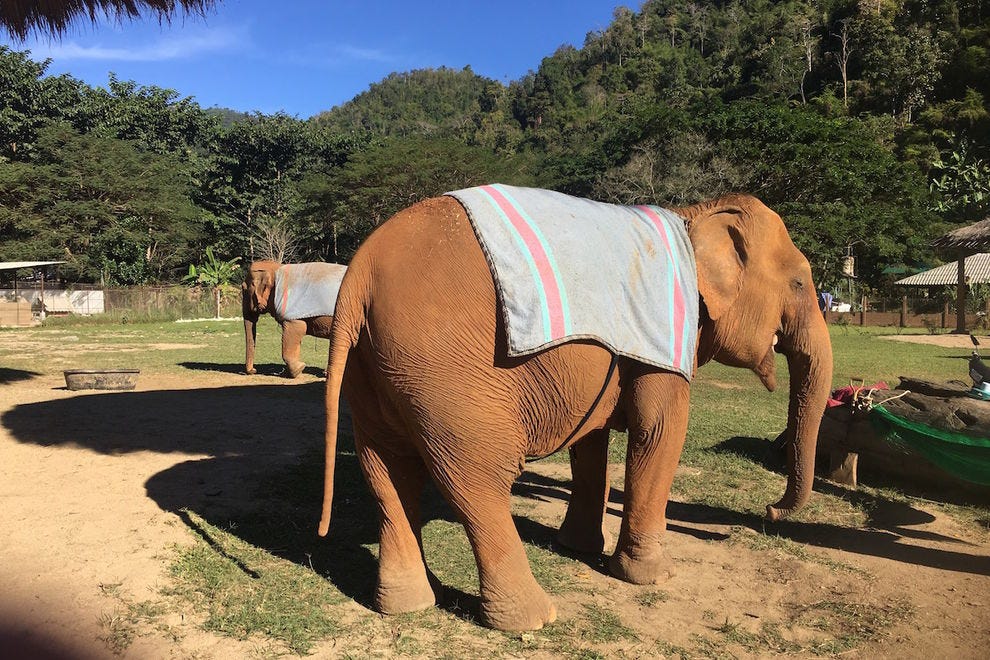 As the daughter of parents who ran a trekking company, Chailert saw firsthand how the elephants were treated, and she embarked on a lifelong mission to change this. Her family disowned her and the Thai government declared her an enemy of the state, but she started rescuing elephants from circuses and logging camps and, thanks to one person’s generous donation, she opened Elephant Nature Park to give these endangered animals a safe home to live out their long lives.

Elephant Nature Park is full of “old ladies” who are warmed with blankets and cozy fires when it gets too cold, and each elephant has their own “mahout” – a caregiver who basically devotes their life to the animal. The bond between the two is obvious as you walk around the grounds and watch them interact.

No one has a stronger connection to the elephants than Chailert, who many call “the elephant whisperer.” As soon as the elephants sense her on the grounds, they literally come running. She coos to them like they’re her babies, and when I put my arm around her for a photo, an elephant immediately pushed it off and whisked her away. 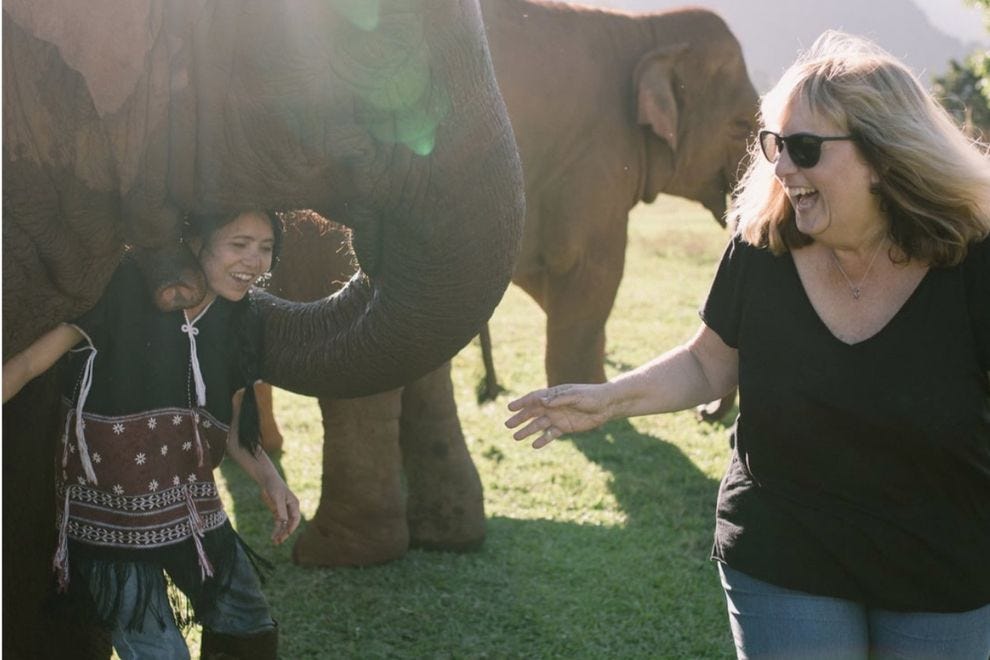 “We want them to receive all the love they never received,” she said. “If I plant a tree and give it love, it will grow. It’s the same with the elephants. They come here like zombies, and with love, they start to play and relax and remember they’re elephants.”

Spending time at ENP gives you a real appreciation for what that means. As you go about your chores – preparing bananas and watermelon, cleaning, picking up poop – or just relax on the porch overlooking the peaceful grounds, you get to watch the elephants in their natural habitat, communicating with each other, giving themselves dust baths and simply being some of the most social, empathetic and intelligent animals on the planet.

Yet it is impossible to miss the fact that all of these elephants are wounded. Although, for the most part, only their physical ones are apparent. They wear their scars – blindness, limping, broken bones, infections – as a reminder of what they’ve been through. And, as they say, elephants never forget.

When you feed them and are able to look right in their eyes, you can practically see their souls. It is a profound experience to get up close and personal with these majestic creatures after hearing their individual stories.

There are less than 45,000 Asian elephants left in the world, and the thought of them becoming extinct is devastating. 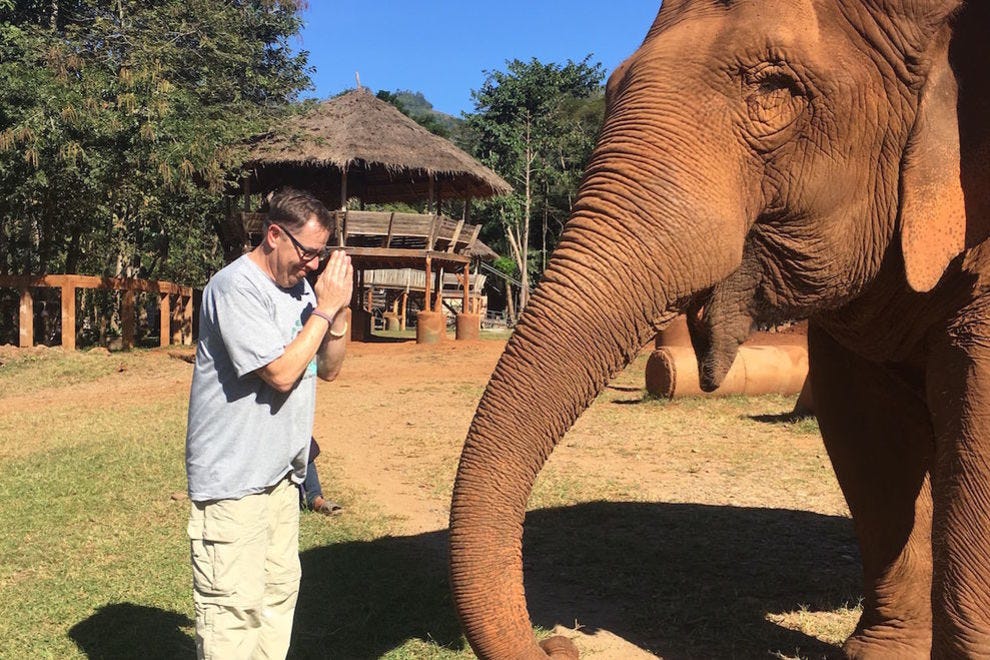 “Our volunteers become our activists,” said Chailert. “They use social media to be the voices for the voiceless and to encourage tourists to skip the elephant rides and shows, and opt for ethical experiences instead. They also encourage guidebooks, travel agents, tour operators and hotel concierges to stop promoting elephant rides and performing animal shows. Once you spend time with these elephants, you immediately become their advocate.”

Chailert understands that many people in Asia rely on elephants for their livelihood, and she has worked tirelessly to convince owners of trekking companies to transform their businesses into sanctuaries and to create a sustainable business model to show them they can still make a living by treating the elephants with compassion.

“This is why it’s so important for tourists to only support ethical companies,” explained Chailert. “Businesses will do whatever is making money for them.”

Many have followed her lead, and she proudly promotes them on her Save Elephant Foundation website. 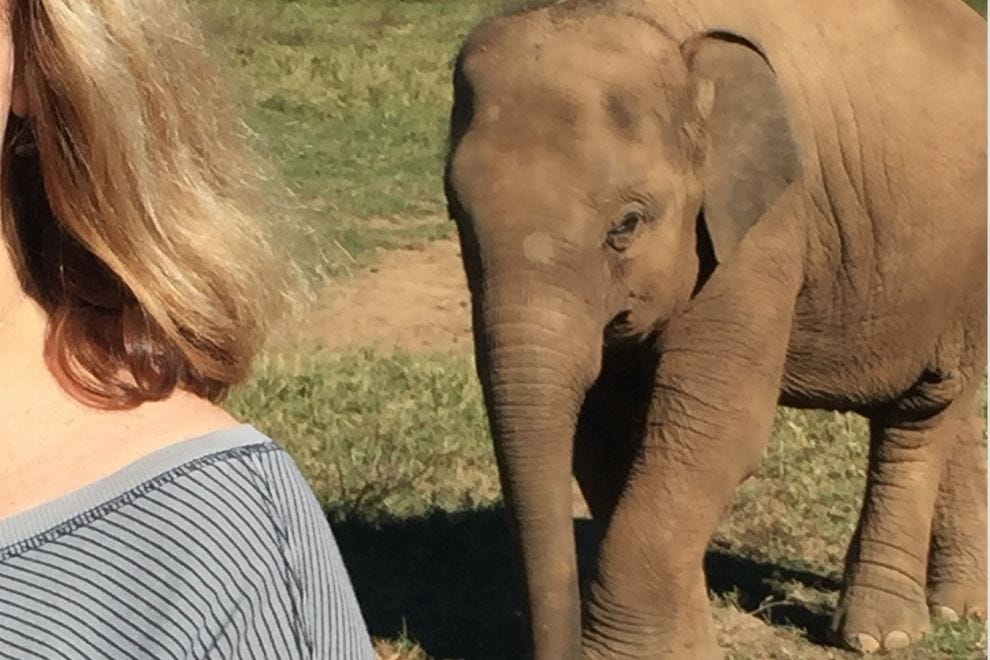 ENP itself provides jobs for hundreds of local people, and when we were there in December, Chailert hosted a Christmas party for the whole community, complete with food, drinks and entertainment, as well as gifts for all the children.

She also provides space at ENP for local women to earn money by offering Thai and foot massages to volunteers (my family happily contributed to this every day we were there), and she hires refugees to work at ENP and pays for their children’s schooling. 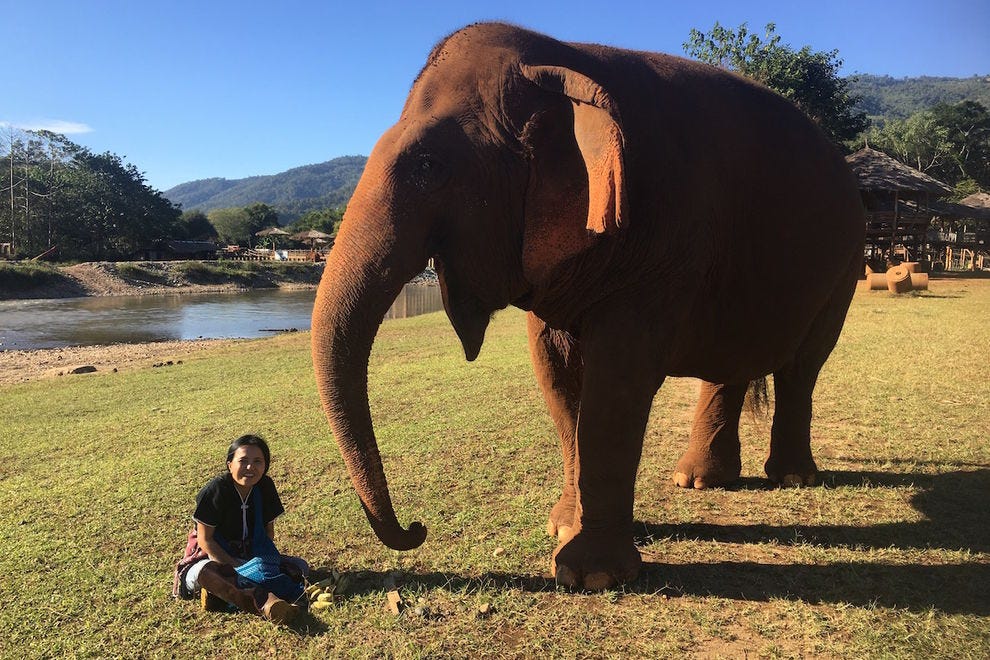 According to Chailert, education is key to changing the world, and her efforts have resulted in her being named one of Time Magazine’s Heroes of Asia in 2005 and one of six Women Heroes of Global Conservation by then-Secretary of State Hillary Clinton in 2010.

Hundreds of rescued animals later, Chailert has no intention of slowing down. “I’m like the train with no brakes,” she said. “I will nag until I shut down the abuse.”

If she’s there when you visit ENP – look down because you may find her sitting calmly under one of her beloved charges – be sure to spend some time with her because she is truly an inspiration.

Small (she stands tall at a mere five feet) but mighty, Chailert is proof that not all heroes wear capes. Some simply wear their heart on their banana-covered sleeve.

AstraZeneca pays up to $6.9 billion in Daiichi Sankyo cancer deal