When Jamey Kennedy, 64, of Clinton, Tennessee, booked a Norwegian cruise on the Viking Sky, she never imagined it would end with her dangling from a helicopter over towering, violent ocean waves.

Kennedy, a strategic planning adviser at Oak Ridge Associated Universities, was at the tail end of an enjoyable vacation with her husband, Allan Reiss, 75, and their neighbors, Laura and Richard Wolfe.

“It came together as a combination of birthday and anniversary presents,” Kennedy told the Knoxville News Sentinel Tuesday from London’s Heathrow Airport, where she was about to catch a flight back to the United States. 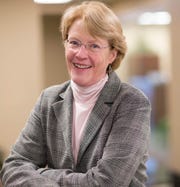 They had spent two weeks in Norway, exploring the cities and chasing the Northern Lights in the fairly new Viking Sky cruise liner before three simultaneous engine failures stranded all aboard in the middle of a storm.

According to one of the crew members of the Viking Sky cruise ship, one of the newest ships of the Viking Ocean Cruises, the last 48 hours on board will not soon be forgotten by any of the 1,373 passengers and crew.

Kennedy said trouble started when high winds prevented the ship from docking for a planned stop in Bodo. The captain told passengers they would instead have to head straight to Stavanger, the next stop on their itinerary.

The trip should have taken another two days, but late Friday night, Kennedy and Reiss awoke to turbulent seas.

“The boat was just really pitching and rolling back and forth,” she said, adding it was neither her first cruise nor her first time in heavy seas.

“It wasn’t terrible yet, but it was uncomfortable.”

The two stayed awake until early morning when the captain steered the ship into the calm waters of a nearby fjord for a respite before heading back into the open sea toward Stavanger.

Around noon Saturday, the two couples split up for lunch. Kennedy and Reiss ate at a restaurant on a lower deck while the Wolfes headed to the ship’s cafe on the seventh deck.

They couldn’t know it yet, but they would not see each other again for nearly 30 hours. The Viking Sky was about to enter the middle of a bomb cyclone, a predominantly maritime weather phenomenon in which a rapid drop in barometric pressure creates a severe cyclonic storm.

Outside the lower-deck restaurant where Kennedy dined with her husband, waves were bashing against the sides of the ship.

“I just kept looking at Alan and saying, ‘Look at that. Look at that!'” Kennedy said.

They finished lunch and headed back to their room in the ship’s aft to weather the turbulence, but soon, furniture was flying across the room.

“We closed the door to the bathroom and the living room so it was just us sitting on the bed,” Kennedy said.

“You could feel the ship climbing the waves and then just plummeting on the other side. Waves were rocking the sides of the ship too, and it was kind of pitching back and forth as well,” she recalled.

Outside their window, the turbulence was slinging heavy deck furniture back and forth across their veranda.

Then, the alarm went off.

“We’d done an emergency drill before we set sail so we knew what the alarm was. My husband looked at me and said, ‘This can’t be real.’ I looked outside and said, ‘Oh, I think it is.'”

The ship emergency protocol called for passengers to head to muster zones, many of which were on upper decks. But every time Reiss tried to stand up from the bed, the turbulence knocked him backward.

Kennedy said the effort was quickly exhausting Reiss, who has a heart condition, asthma and chronic obstructive pulmonary disease.

Crew members who came by to tell passengers to evacuate stopped to help Reiss up and out of the room into the hallway, which had handrails on one side. 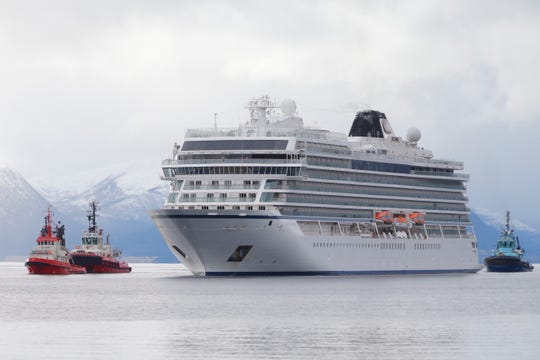 It was there, at around 2 p.m. when the couple saw the power go out.

The ship had lost three of its four engines at once, and the fourth had been idling since the ship set sail.

“All light, all air went out when the power was lost, and the boat could make no headway at that point,” Kennedy said.

“We really were at the mercy of the sea. Whatever way the waves were going, we were going too.”

At the sea’s mercy

The hallways were dark, and the elevators didn’t work.

Meanwhile, Reiss’ breathing continued to worsen, and the couple realized they weren’t going to make it up to the muster zone.

With help from the crew, the couple descended five flights of stairs in the dark to the ship’s below-deck clinic.

“The ship was still just rolling, probably 60 to 70 degrees to each side,” Kennedy said.

Inside the clinic, medical equipment was flying around the room. They could hear the captain’s announcements, but there were no windows to see what was happening outside.

The storm was blowing the ship toward huge underwater rocks in an area notorious for shipwrecks near the Hustadvika Bay. The captain managed to get one engine back online and dropped the anchor, within 150 meters from a certain collision.

Then he broadcast a mayday signal and called for rescue, Kennedy recalled.

Helicopters were on the way and Reiss needed medical attention.

Three crew members carrying an oxygen tank helped the couple ascend nine flights of stairs to the eighth deck. “They were just heroic, absolutely amazing,” Kennedy said. “No one panicked. They cared about every last one of us.”

The helicopters had to approach the ship one at a time in the heavy storm. Each could hold 20 people, and those in need of medical attention were sent out first.

Kennedy said she saw a man who broke his neck when ship turbulence flung him head-first into a wall, and another who had fractured her ankle, nicking her tibial artery. The crew couldn’t control the bleeding.

A fourth woman, who Kennedy said was around 90 years old, normally used canes to walk, but injured her shoulder in the turbulence and had to be taken out on a stretcher.

The wait gave Kennedy a brief opportunity to text her sister.

“In case we all died, I wanted her to know which day care my dog, India, was in,” she said with a laugh. “No one knew where she was, and I wanted to know that someone would get her and take care of her.”

When the third helicopter approached, it was Kennedy and Reiss’ turn. Rescuers used strops — a kind of maritime-durable strap that threads beneath a person’s arms — to lift them.

“We had to keep our arms down around it and then we were dangling,” Kennedy recalled. “We went up without life preservers because we were below deck when they were passed out, and the wind was terrifying, just blowing us back and forth.”

They slammed into the deck’s plexiglass balcony rail on the way up, and Reiss lost his glasses, pants, wallet and one of his shoes in the wind.

“But the pilots were fantastic, it was not easy weather to fly in and they just kept readjusting to keep from blowing into the ship,” Kennedy said. 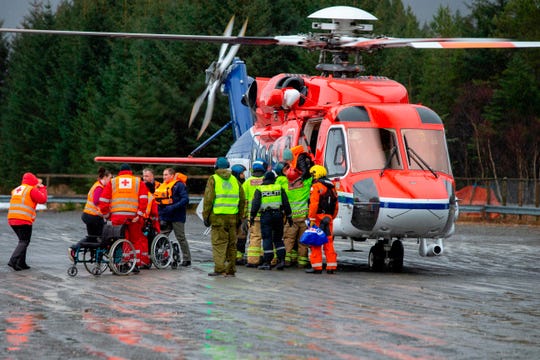 She saw six more people loaded into the helicopter after them. Then it took off toward a gymnasium in Molde, Norway, where the Red Cross had set up shop.

Volunteers triaged Reiss and sent him to a hospital.

“All of his medical equipment was still on board the ship, and his oxygen was really low, so they decided they would keep him there at the hospital for two days to take no chances,” Kennedy said.

Many left behind on the ship

Just one deck below where the couple was airlifted out, their traveling companions, the Wolfes, endured a different nightmare.

While Kennedy and her husband were in the medical clinic, turbulent winds threw several deck tables through the windows of the restaurant where the Wolfes were having lunch.

The ship took on water and crew members formed a human chain to reach the life vests outside without being blown into the sea.

Kennedy was texting back and forth with Laura Wolfe throughout the ordeal, but only in the kind of short questions and statements that burst forth instinctively in an emergency:

“We don’t know what is happening.”

The Wolfes knew Kennedy and Reiss were evacuated. Kennedy knew the Wolfes were still on board; the rest Kennedy had to piece together from shore.

After Reiss was settled in the hospital, volunteers drove Kennedy to a hotel in Molde, where Torstein Hagen, Viking Cruises founder and CEO, had just arrived to address the evacuees.

“I realized we had all this information, but the guys left on the ship had none of that,” Kennedy said.

She found out the helicopters only evacuated about 480 of the 1,300 passengers on board the ship.

The rest of the passengers still had nearly 24 hours to go before they would reach safe harbor. The ship made it into calmer waters, where a tugboat began hauling it to port.

“All night we were texting back and forth asking for updates on progress, asking if she knew when they would get to shore, and she would say no.”

Kennedy finally got to video-chat with Laura around 7:30 a.m. Sunday morning, and they talked about everything that had happened since they last saw each other.

About 10 hours later, the Wolfes arrived in port. 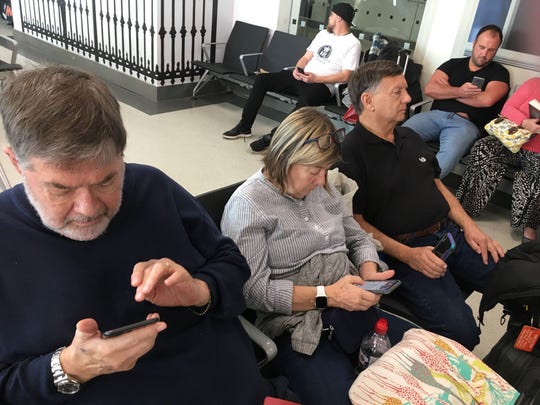 From left, Allan Reiss, Laura Wolfe and Richard Wolfe wait for a flight back to the United States from London’s Heathrow Airport. The three were on board the Viking Sky cruise ship with Jamey Kennedy when engine failure stranded them in the middle of a storm. (Photo: Jamey Kennedy)

Thanks to Norway’s publicly funded health care system, the couple owes nothing to the hospital where Reiss stayed — except their gratitude, which Kennedy said she has in abundance.

“The thing that is just most amazing to me through it all is the way so many people we’d never met before rallied around us,” she said.

Thousands of Norwegians went out and bought brand-new clothing to donate to the evacuees. Shop owners opened a nearby mall on Sunday, when it was normally closed, so evacuees could buy whatever they needed.

Most of the evacuees had lost their wallets or purses, so Viking provided about $300 for them to buy provisions.

“I can’t say enough about everyone who helped us,” she said. “We are so grateful to the Viking crew, the first responders, the Red Cross volunteers and everyone else who took care of us.”