FORT MYERS, Fla. — When Rob Gronkowski announced his retirement from the NFL via an Instagram post Sunday night, he wasn’t the only one leaving pro football behind.

It also signaled an end for his mother Diane Walters.

“Following my five sons through their sports careers for 31 years, it feels like I’ve retired too,” the Fort Myers resident said Monday. “If I took all of my sons’ careers individually and multiply it by five, it’s like 130 years.”

Walters, who had sons Dan, Chris, Rob and Glenn play in the NFL and one, Gordie Jr., play professional baseball, said her most famous son didn’t consult her about hanging up his helmet and cleats after nine seasons playing for the New England Patriots. 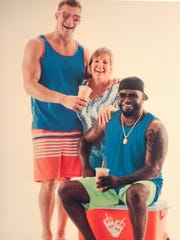 “When I’m with him, we usually don’t talk about football, but it would come up from other people,” she said. “There were always questions about how he was feeling and when he was going to retire. He never said one word to me about retiring, but I know he was looking at his future and wondering how he was going to feel physically. That was his biggest concern.

“He now feels he’s got time to get his body back to where he wants it. The last thing he wanted was being 50 years old and sitting around in constant pain.”

Gronkowski, who doesn’t turn 30 until May 14, will almost certainly land in the Pro Football Hall of Fame. A three-time Super Bowl champion and a four-time first team All-Pro selection, Gronkowski was the highest ranked tight end in the NFL Top 100 players for six consecutive years (2013 through 2018).

He was also one of the most recognizable players in the league due to his larger-than-life personality.

“That’s no act, that’s who he is,” Walters said. “He’s always been an extremely positive, happy person. Even when people are putting him down. There was a time four or five years ago where critics were saying he was done, writing him off. I only think that motivated him to come back even stronger.”

Walters said she’s unsure what Gronkowski will do in the future, but she believes he’ll be a success in whatever he pursues.

“This isn’t the end for him,” she said. “This is just the beginning. I think there are still many big things to come for him. But right now, he’s just taking some time away and enjoying being retired.”

And what about mom?

“I don’t think it will fully set in until August when there’s no more football for my sons,” she said. “But it will start all over again with the grandchildren, so there’s plenty to look forward to for everyone.”