Turn off your cellphone. Downsize your luggage. And remember that your standards aren’t necessarily their standards.

I used to be one of them. I spent 18 years in Europe and I moved around every year or so. I also wrote a book called “How to Be the World’s Smartest Traveler” in which I failed to credit these frequent travelers for their travel smarts. I’m about to remedy that – and just in time for the busy spring break travel season. 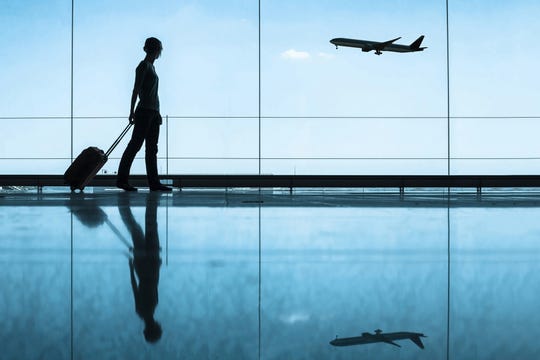 Most expatriates travel with a minimum of fanfare – which is to say, they get there as quickly and efficiently as possible and avoid touristy activities. (Photo: Getty Images/iStockphoto)

Power down that smartphone

Jason Donahue, the co-founder of the site Sidewalk (sidewalk.guide), and also a foreign service brat, shared an interesting story about a friend. He’s the boyfriend of an Instagram celebrity who privately admits that he hates to travel.

“He never gets to enjoy a new place,” says Donahue. “He is always behind the camera to photograph food as it grows cold, to position tripods as the golden hour approaches, to photoshop perfection in the late hours of the evening. Too many social media travel stories depict an aura of artful travel, but they are manufactured facades.”

How true. He says you have to set aside time to explore the neighborhood behind a popular tourist attraction, to eat where the locals eat and, above all, to give yourself permission to enjoy it.

I live in Studio City, California, at the moment, just a few city blocks away from the famous Brady Bunch house. Every morning, I walk past the house, which was recently purchased by HGTV and is being restored to its 1970s glory. I see tourists snapping pictures of the home and then driving off to their next stop.

But they’re missing one of the coolest neighborhoods in Los Angeles, a leafy suburb with architecturally interesting homes and citrus trees with ripening fruit. I have no objection to people taking a snapshot of the home, but afterward, they should holster that handheld and take a walk to see the real L.A.

Travelers pack too much. Board any bus, flight or train, and you’ll know what I’m talking about. Transporting your baggage is big business for airlines, which collected a record $4.6 billion in luggage fees in 2017, up from $4.2 billion the year before.

Almost every travel advice story I’ve written has a talking head who preaches the virtues of minimalism. But for Sara Bishop, an expatriate who currently lives in Melbourne, Australia, traveling light means something entirely different. She’s an anthrozoologist, studying interactions between humans and other animals, and for her it’s the animals in our luggage that should get some scrutiny.

“To have or not to have pets?” she asks. “Is the emotional cost worth the benefit?”

It’s not just the stress to the animal, but also the expense and hassle of transporting pets.

“I have shipped tigers with more ease than I can move my personal animals,” she says.

I have two perspectives on this issue: as a former pet owner (actually, it would be more accurate to say that my Bengal cats owned me) and as an advocate for travelers. Every day I receive complaints about traveling with pets or about other people’s cats and dogs. And I agree with Bishop: Travel and animals don’t mix, particularly transporting pets on domestic airlines.

More: Traveling with a pet? Should you fly commercial or private?

For me, though, it’s the emotional cost of having a pet and being separated from it when you go on the road. Eventually, I had to give up my beloved Bengals for adoption. I miss them every day. I’m now an advocate of traveling light, by which I mean, if you plan to be on the road a lot, don’t adopt a dog or cat. The burden is too heavy.

A note about standards

One more thing: Assume nothing.

That’s particularly true when it comes to standards. Sheryl Hill, who is the executive director of a travel safety nonprofit called Depart Smart, learned that lesson when she worked in diabetes rehabilitation in Vienna and traveled into Eastern Europe. Medical care is not always to American standards overseas and even when it is, your insurance may not cover the treatment. “I didn’t really have a handle on the fact that my medical insurance would not cover me,” she adds.

She also discovered that many of the things we take for granted in the U.S., including adequate heating, are not always provided.

Many travelers leave the country assuming that everyone will speak English and that their accommodations will be just like at home. But expatriates know that’s not true, and they assume nothing. Adjusting their expectations means they’ll almost never be disappointed – and there’s something to be said for that.

Most expatriates travel with a minimum of fanfare – which is to say, they get there as quickly and efficiently as possible and avoid touristy activities.

• Register with the State Department. The Smart Traveler Enrollment Program (step.state.gov) is a free service that allows U.S. citizens traveling and living abroad to enroll their trip with the nearest U.S. embassy or consulate. The State Department sends important information from the embassy about safety conditions in your destination.

• Get the right protection. If you’re overseas for a long time, you’ll want to consider an annual travel insurance policy through a company like Allianz Travel Insurance (allianztravelinsurance.com) or AIG Travel Guard (travelguard.com), or a membership in Medjet (medjet.com), a Birmingham, Alabama, company that provides medical transport and travel security protection.

• Learn the language and customs. The best way to get up to speed is through a language immersion course, but if you don’t have that opportunity, try one of the learning apps like Babbel (babbel.com), Memrise (memrise.com) or Rosetta Stone (rosettastone.com). They’ll help you get up to speed on a new language quickly.

Christopher Elliott is a consumer advocate. Contact him at chris@elliott.org or visit elliott.org.

US midfielder McKennie out several weeks with ankle sprain