Chip Ganassi Racing rookie Felix Rosenqvist talks about qualifying fifth for Sunday’s IndyCar Classic and what a key to the race might be.
Jim Ayello, jim.ayello@indystar.com

AUSTIN, Texas — History has been made. A few days shy of his 19th birthday, Colton Herta conquered Sunday’s inaugural IndyCar Classic at Circuit of the Americas and became the youngest race-winner in IndyCar history.

The previous owner of the record was the man who finished fourth, Graham Rahal, who won at St. Pete when he was a 19 years, 3 months and two days old.

Herta, the second generation driver and Harding Steinbrenner leading man bounced backed from a rough opening day at COTA when his engine failed during Friday’s first practice session. The team missed the second session but did a remarkable job to replace his engine and get him back on track for the day-ending “warmup” session.

From there, Herta and HSR flourished. He qualified fourth on Saturday and stayed with the leaders all day Sunday until becoming the benefactor of a late yellow. He held off his competitors in the final restart and made history.

The winner’s circle: Joining Herta in the winner’s circle is the man who has preached consistency since it eluded him last year. After winning the season-opener at St. Pete, Josef Newgarden backed it up with a runner-up finish at COTA. Hard to imagine a better way to start the season.

Ryan Hunter-Reay, meanwhile, bounces back from a DNF at St. Pete (blown engine) to claim his first podium of the season. 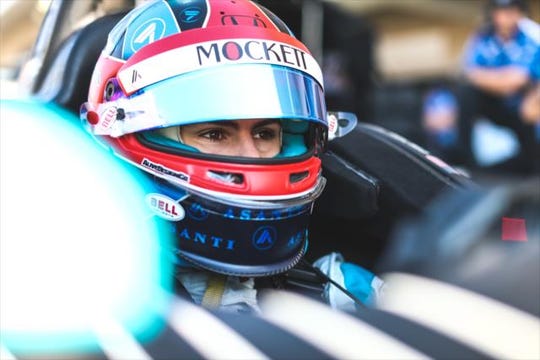 Unforgettable: So. Many. Choices. Power’s heartbreaking end to the race, or Rosenqvist’s stunning crash — I’ll get to both later. Instead, let’s go with something positive. Rookie Pato O’Ward has injected Carlin Racing with all kinds of excitement. In fact the uber-talented young Mexican driver has the eyes of the IndyCar world watching now, mostly because of moves like this:

Spectacular stuff from the @IndyCar rookie @PatricioOWard on Rahal! #INDYCARClassicpic.twitter.com/VkRRlLdsKH

Drive another day: Poor Will Power. When it rains it pours on this guy. After leading 45 of Sunday’s 60 laps, he, Alexander Rossi and Scott Dixon all got caught out by a late yellow flag caused by a Felix Rosenqvist crash in Turn 19. In the pits thinking of how he might simply salvage the day, his car suffered a mechanical failure and never left pit lane.

Instead of a win, Power suffered a last-place finish.

“Massively disappointed man,” a frustrated Power told the NBC Sports TV broadcast. “To lead so many laps and have the guys work so hard all weekend. … I just wish I didn’t have to; I just want to have a normal run without this sort of crap.”

The leaderboard: A runner-up finish keeps Newgarden squarely out front in the championship. His 93 points are 18 more than Herta, who now sits in second.

Prediction corner: Rossi’s race wasn’t the only one ruined by that late yellow flag. My pick to win the IndyCar Classic got cycled to the middle of the pack after Rosenqvist-Hinchcliffe incident caused a yellow flag late in the race.

Thank you! You’re almost signed up for IndyStar Motor Sports

I also thought ex-Formula One driver and Arrow Schmidt Peterson Motorsports Marcus Ericsson would enjoy a nice day at a familiar track, and he was on pace to do so until he was penalized for an unsafe pit lane exit and sent to the back of the pack.