Vibrant and diverse, Oahu’s culinary scene is evolving at a rapid rate in Honolulu – as well as across Hawaii’s most populated island. Spearheaded by creative chefs who combine local, fresh ingredients with innovative flavors and cooking techniques, the island is offering a multitude of exciting and surprising dining experiences, at new establishments as well as long-time favorites.

From casual to exclusive, these 10 restaurants feature some inventive, “must-try” dishes on the island of Oahu. 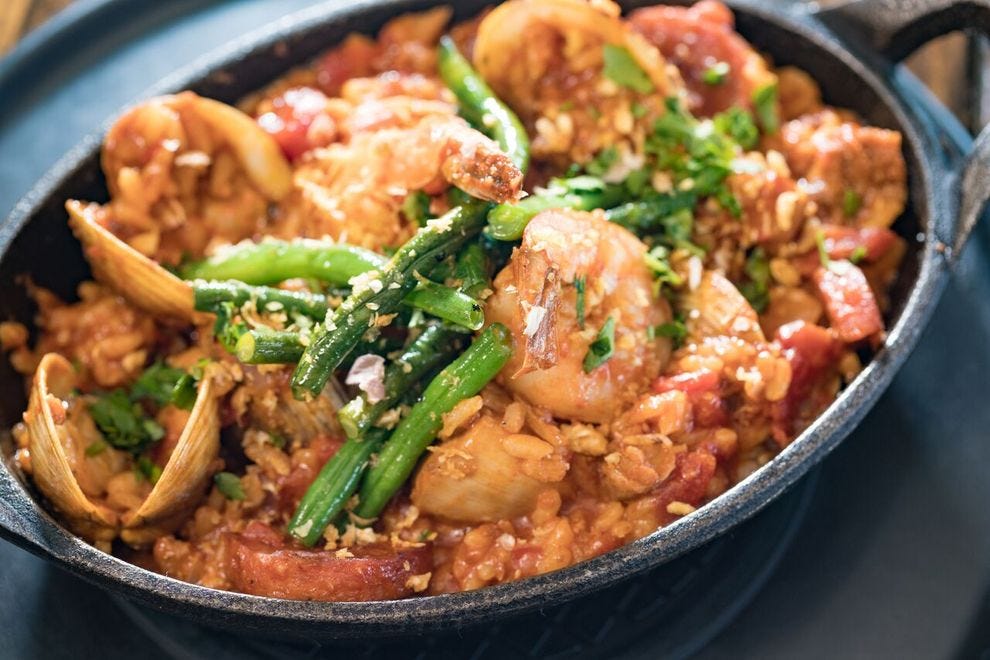 This specialty is a fusion of classic paella and Roy Yamaguchi’s grandfather’s tomato-based stew. The base of this savory rice dish is an aromatic chicken, lobster and clam stock reduction and features local Portuguese sausage, Kauai shrimp and saffron spice.

Yamaguchi’s grandfather was a Maui plantation worker in the early 1900s and later opened a tavern where he served a signature beef stew.

Roy Yamaguchi explained, “When I was growing up, my father would recreate my grandfather’s beef stew. When we opened Eating House 1849, I wanted to take the same approach and turn the Spanish paella dish into the Plantation-Style Paella, which reminded me of the stew created by my grandfather. It’s the memories of my past that inspired the paella dish and the origin of our Eating House concept.” 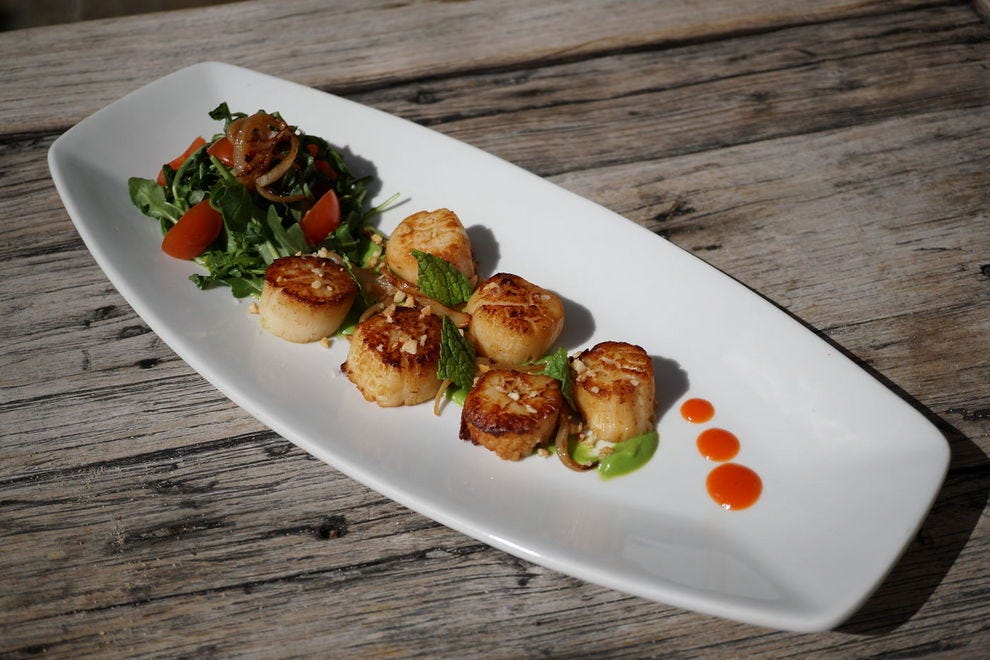 Delia Romano is the executive sous chef of The Reef Bar & Market Grill at the legendary Outrigger Reef Waikiki Beach Resort. As a vegan, she has added a variety of specialties to the menu, including vegan “scallops.”

Made with seared local ali’i mushrooms that are infused with fresh herbs and Hawaiian sea salt, this dish is paired with a minted lemon pea puree, roasted red pepper coulis, and garnished with toasted macadamia nuts. It’s accompanied by cherry tomatoes and arugula tossed in house white balsamic vinaigrette.

Romano said, “The texture of the mushrooms gives the sensation of eating a scallop, while keeping it strictly plant-based. The brightness of the pea puree and the tartness of the arugula round out the dish. Having a venue literally on the beach and being vegan was my inspiration for this vegan “fish” dish. You get the illusion of eating scallops, but you’re really dining on delicious produce from the island.” 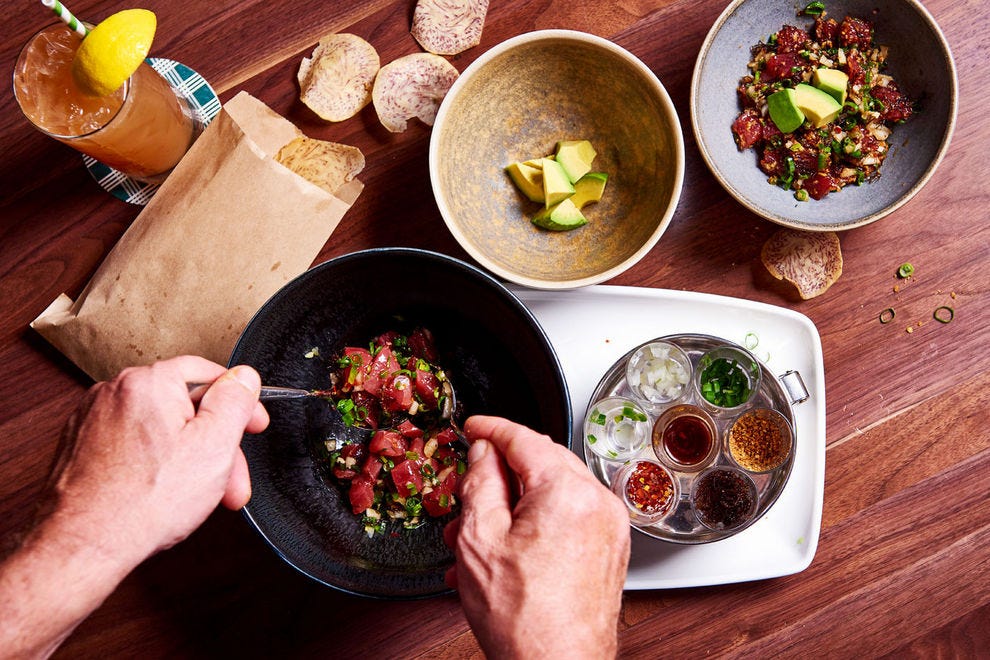 The tableside poke at Merriman’s restaurant is an exceptional experience, so there’s no surprise that it’s one of the most popular dishes at Merriman’s Honolulu, where they sell about 700 orders monthly.

All of the ingredients are rolled out to the table atop a cart. The server asks about taste preferences and expertly prepares the fresh poke in front of you. Featuring sashimi grade ahi, options for this dish include avocado, sliced chives, Maui onion, ogo (Hawaiian seaweed), jalapeno, chili flakes and poke sauce. It’s served with house-made taro chips.

Chef and owner Peter Merriman says, “We apply our minimalist approach and keep the flavors clean and simple, so the customer can taste the great quality of fish. Making this dish tableside allows the guest to select exactly how poke is prepared. Everybody in Hawaii has an opinion on how poke should be made, and this way, they get to have input on their own version.” 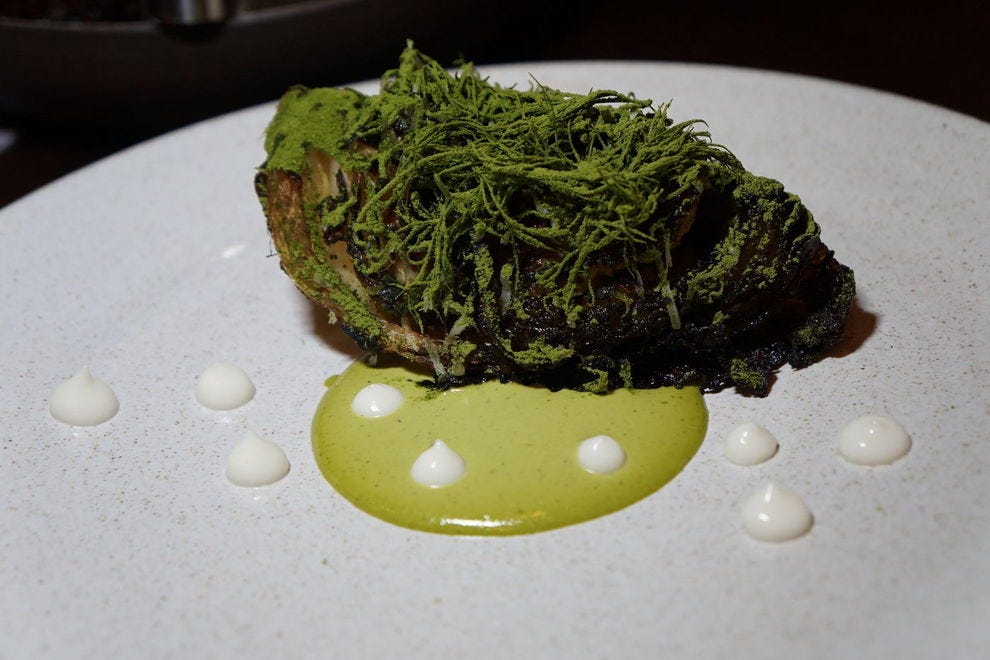 Oahu resident Melissa Chang is a food blogger at FrolicHawaii.com and an expert on the Hawaii dining scene. She said, “One of my favorite dishes is the cabbage at Senia. Everything they serve is exquisite, but this one unusual-looking dish is what people talk about. If you close your eyes, you might not even be able to tell if it’s a vegetable, because the layers of flavor create different illusions in your mouth with every bite…this dish is a testament to the chef/owners’ creativity.” 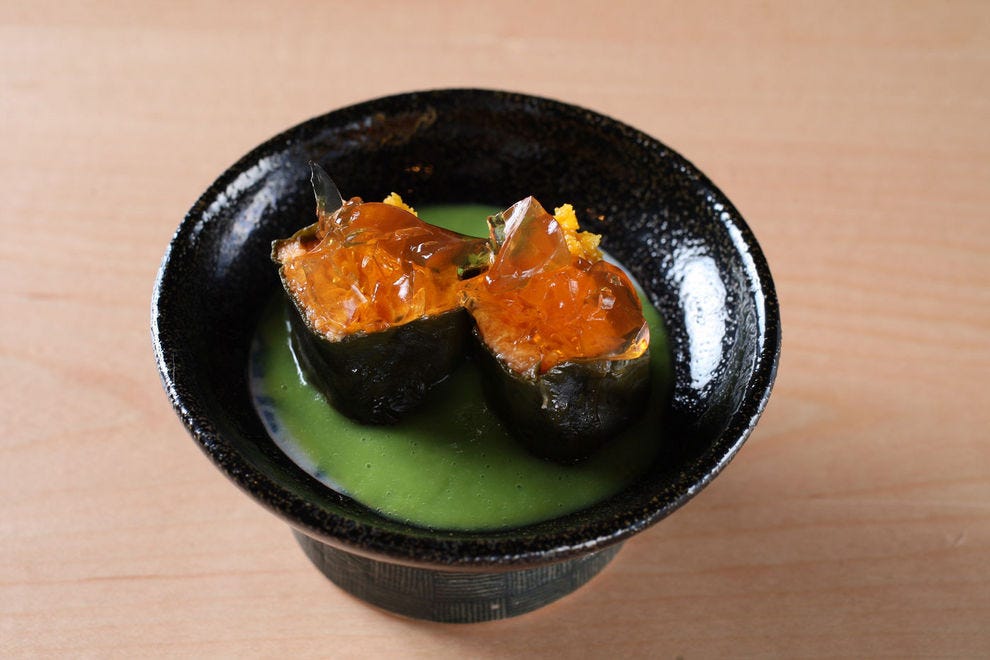 When Edomae sushi master Keiji Nakazawa opened his first Sushi Sho location outside of Japan at The Ritz-Carlton Residences, Waikiki Beach in 2016, he used the islands’ cuisine as inspiration for his menu at this exclusive 10-seat restaurant. One of his favorite dishes was Hawaiian Lau Lau, which is traditionally made with pork.

In chef Nakazawa’s adaptation, he steams Copper River salmon and opah cheek, and serves it with tosazu gelée made of vinegar, katsuo dashi stock and soy sauce. These two-bite pieces are accompanied by yuzukosho (salted yuzu peel and chili pepper paste), asparagus and taro.

Chef Nakazawa stated, “I have so much respect for Hawaiian culture and traditions and wanted to use local ingredients to create something new, using the Edomae technique.” 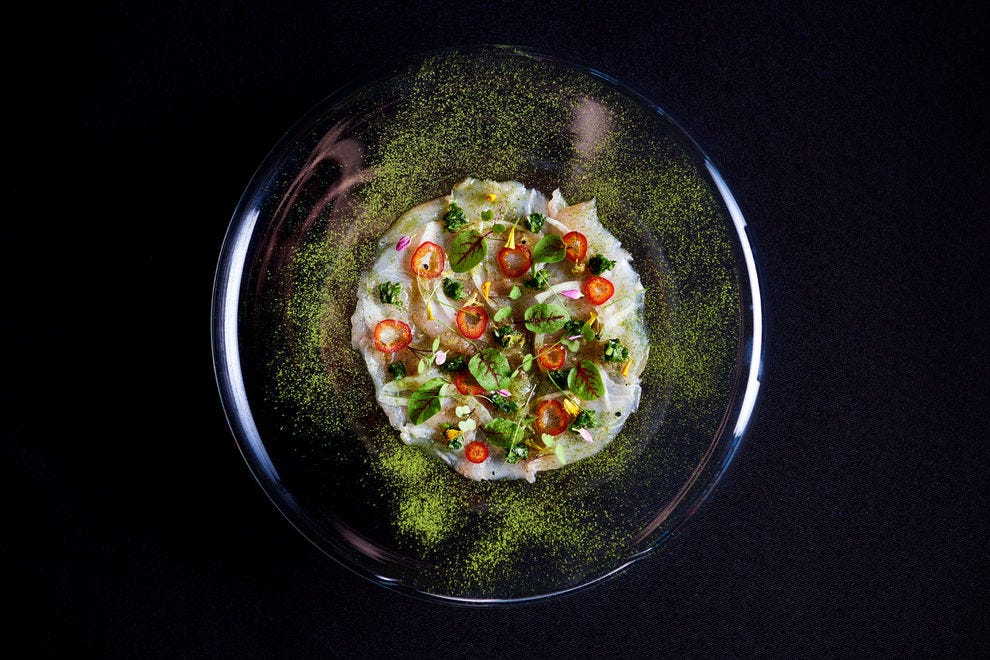 The culinary experience at Hoku’s restaurant at the Kahala Hotel & Resort on Oahu is as impressive as the stunning panoramic ocean views from the soaring dining room windows. The Kona Kampachi Carpaccio is a refreshing and flavorful dish that showcases farm-raised Kampachi from the coast of Kona (the Big Island).

It combines acidic moringa chimichurri and moringa salt, accented with slices of sweet local onions and slivers of chile peppers, which add a heated crunch. Garnished with local micro greens and flowers, it’s then dusted with moringa salt.

Hoku’s Chef de Cuisine, Eric Oto says, “While moringa, also known as kalamungay, has been used in Filipino cooking in Hawaii for generations, it is recently gaining popularity as a ‘super green’ with many health benefits. This dish serves as a delicious introduction to this superfood.”

The Pig and the Lady 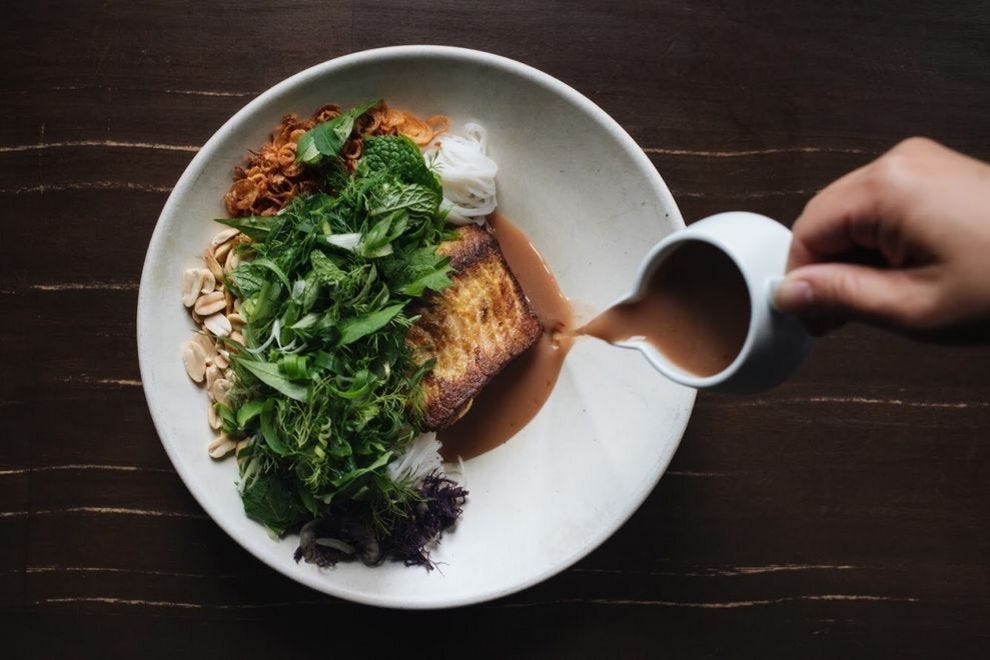 The Pig and the Lady‘s Hanoi Style Fish and Poi features the catch of the day that’s marinated with turmeric and served with pickled ogo, dill, scallion, day-old poi and chilled rice vermicelli. The fresh poi is added into the fermented shrimp. Owner and chef Andrew Le added, “This helps give the sauce a silky and fuller mouthfeel along with the slight tang from the day-old poi.”

Le continued, “This dish’s inspiration came from our time in Hanoi and eating the city’s iconic cha ca Hanoi, which is turmeric catfish grilled with dill and a funky fermented shrimp or anchovy sauce. Being from Hawaii, we wondered what was our iconic fish dish. Then we realized it was the classic pairing of fish (raw, grilled or fried) and poi.” 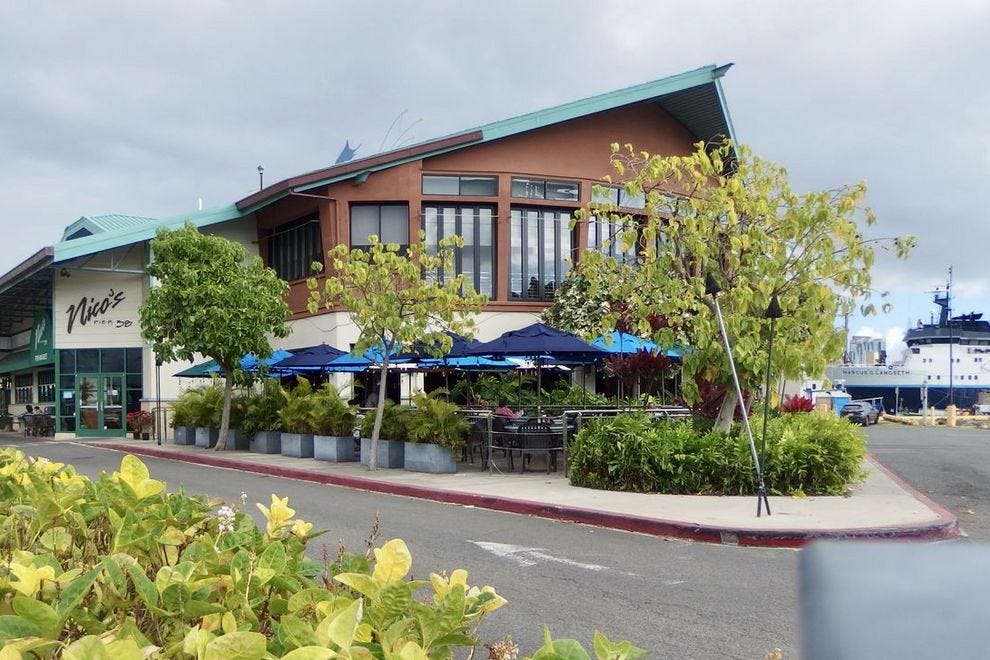 Situated on the harbor, the bustling Nico’s Pier 38 offers a rare dockside dining experience on Oahu with picturesque waterfront views in a laid-back indoor/outdoor setting. Especially popular at sunset, Nico’s is the real deal.

The menu’s extensive seafood options are fresh-caught daily specialties from local fishermen. Food lovers keep returning for the signature ahi ribs, a fried specialty that is accompanied by a house-made spicy sauce.

Long-time Oahu resident and self-proclaimed foodie, Izah Blue says, “I always order the ahi ribs because they’re truly flavorful and so incredibly tender. The fish falls right off the bone and it’s perfectly complemented by the zesty sauce. These ribs are delicious – and one of my all-time island favorites.” 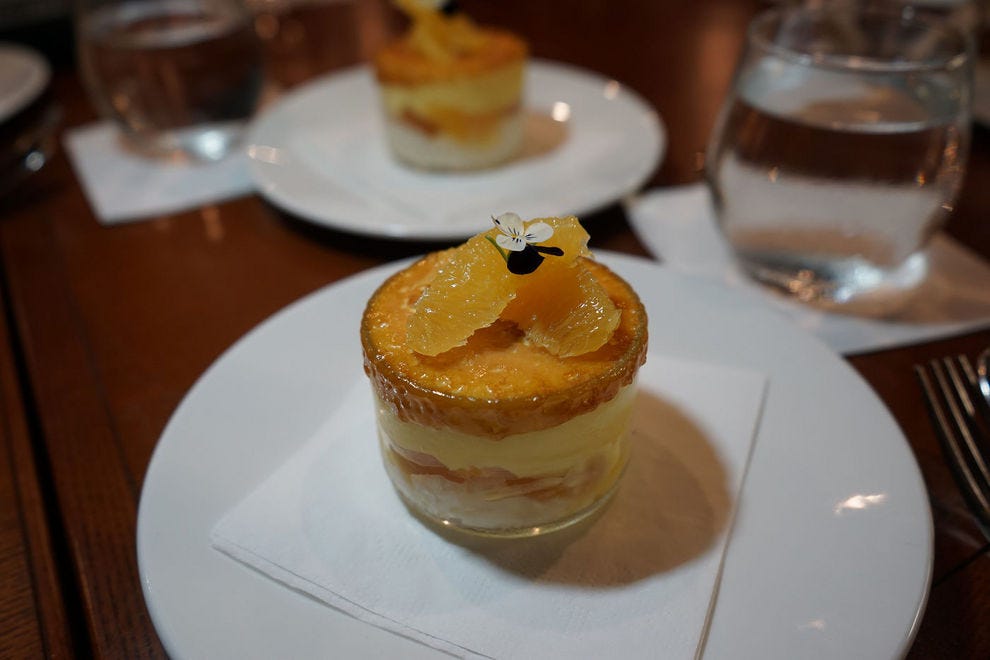 Karr-Ueoka said, “Growing up, I loved eating creme brûlée, but my favorite part was the top because it was crispy. I wanted to re-create a healthier top that wasn’t just sugar. I love a variety of textures and flavors in dessert, so I wanted to create a unique twist on the classic. Haupia tapioca was my version of the Filipino dessert halo-halo, and then I added lilikoi kanten, which is my tribute to gummy bears, which happen to be my favorite candy.” 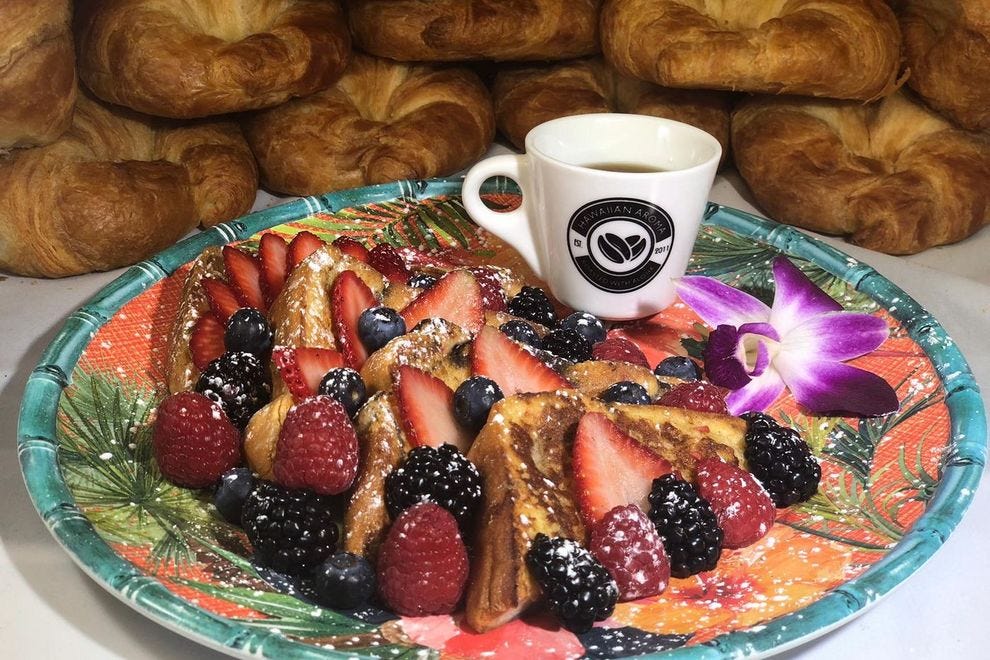 Hawaiian Aroma Caffe at Waikiki Beachcomber by Outrigger hotel is a funky, light-filled surf-style eatery that serves up an array of casual fare, along with a variety of coffee beverages. One of their top-sellers is the Waikiki Ono (delicious) French Toast.

Light and fluffy on the inside, this French toast is golden and crispy on the outside. Topped with fresh berries, powdered sugar and maple sauce, this dish is made with locally-baked Okinawan sweet potato brioche that’s soaked in Big Island Dairy’s whole milk, organic eggs, a sprinkle of cinnamon and a dash of island-grown vanilla.

Founder and CEO, Jonathan Rotmensch, says this French toast was inspired by Waikiki itself, as it integrates numerous cultures and lifestyles into one plate. He suggests, “I recommend adding some cream cheese and bacon on top. And for those who’d like to catapult the dish to a whole other level, we also suggest a drizzle of condensed milk.”