PHOENIX — It’s 8:30 in the morning, and instead of sitting in front of his locker preparing for a spring-training start, Los Angeles Dodgers three-time Cy Young winner Clayton Kershaw is shirtless, throwing a medicine ball against the wall in a hallway.

The greatest pitcher in baseball most of this past decade still has not thrown a single pitch in a spring-training game.

Walker Buehler, their ace in waiting, is nowhere to be found in the Dodgers’ clubhouse. He hasn’t quite felt right all spring and is scheduled to make his Cactus League debut on Tuesday night.

So, here are the Dodgers, winners of six consecutive National League West titles and back-to-back pennants, with 10 days remaining until their season-opener, and their two greatest pitchers won’t be ready for the season. 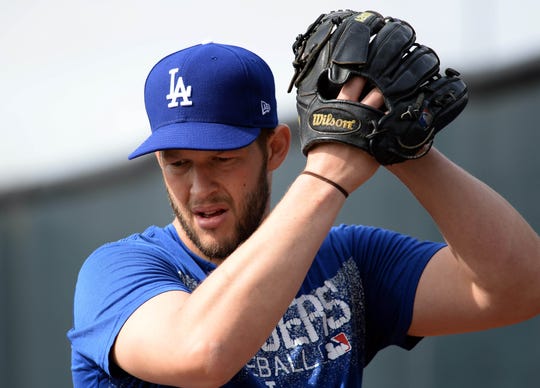 Clayton Kershaw has not thrown over 200 innings since the 2015 season. (Photo: Joe Camporeale, USA TODAY Sports)

They have publicly insisted that Kershaw, despite being sidelined three weeks with shoulder inflammation, could still be ready, extending his franchise-record streak to nine consecutive seasons of being the opening-day starter.

Realistically, they know it makes absolutely no sense. Why in the world would they rush him back after signing him to a three-year, $93 million contract extension last November? It’s no different for Buehler, 24, who inherited the ace role a year ago when Kershaw was sidelined with injuries.

The Dodgers could open with Rich Hill, 39, the oldest active starter in baseball, taking the mound against the Arizona Diamondbacks, with Kershaw and Buehler simply watching.

Can you imagine the panic if this happened in New York with Mets’ Cy Young winner Jacob deGrom and Noah Syndergaard? The fear in Houston if Justin Verlander and Gerrit Cole weren’t ready? The misery in Cleveland without Corey Kluber and Trevor Bauer?

Yet, there’s a greater level of fear and anxiety in Los Angeles fighting the traffic on Vin Scully Avenue than opening the season without their co-aces.

DRASTIC CHANGES: MLB to shake up look of game

The Dodgers are so deep and filthy rich in pitching talent than some of their own players weren’t even aware Kershaw and Buehler have been sidelined all spring.

“Honestly, I didn’t realize they haven’t pitched in a game all spring,’’ Dodgers reliever Joe Kelly tells USA TODAY Sports. “I see them every day, look at the boxscores, and hadn’t even noticed because everyone else is so good and talented.

“But I don’t think anyone has even blinked.

The Dodgers have such an embarrassment of riches in starting pitching that rival baseball scouts and executives are convinced the Dodgers are almost better off with Kershaw and Buehler not opening the season, or pitching 200 innings, keeping them nice and fresh for the postseason.

“The five guys who won’t make their starting rotation,’’ one AL executive said, “would be better than three-quarters of the teams in baseball.’’

They still have Hill, Hyun-Jin Ryu, Kenta Maeda and Ross Stripling to open the year. Former top prospect Julio Urias, who has been sensational all spring, yielding one run and striking out nine in nine innings, may not even make the team, or be relegated to the bullpen.

And no one in the entire Cactus League is drawing more rave reviews than their top two pitching prospects, Dustin May and Tony Gonsolin, who have pitched 15 shutout innings. They’ll open the season in Class AA Tulsa, but by September, should be in Los Angeles and be their secret weapons in October.

“We want Kershaw’s name on the lineup card every fifth day, but until he’s ready, we’re more than comfortable with what we’ve got,” Dodgers veteran infielder David Freese says. “My goodness, we’ve got some studs.’’

Who would ever imagine this will be the first time since 2010 the Dodgers will have an opening-day starter not named Clayton Kershaw — the last being Vicente Padilla — and it could actually be beneficial to the Dodgers’ World Series hopes?

The Dodgers, utilizing their depth, could still win the division, be cautious with Kershaw and Buehler, and when October rolls around, have the freshest rotation in the postseason.

“It’s always better to have those guys pitching every fifth day,’’ said Andrew Friedman, Dodgers president of baseball operations, “but there is a scenario where we look back at the end of the season, and it’s a good thing.

“It’s not something that you necessarily draw up, but more perspective after something happens, looking for the silver lining and thinking about it from a positive.

“It’s about getting guys back, making sure they stay back, putting them in the best position to be as strong as they can be.

“So, we’re not going to cut corners in our process.’’

Translation: Kershaw will not be their opening-day starter, and it’s quite possible he opens the season on the DL.

Yet, after what the Dodgers saw during his 38-pitch bullpen session Sunday, with everyone watching from manager Dave Roberts, Friedman, president Stan Kasten, pitching coach Rick Honeycutt and bullpen coach Mark Prior, Kershaw looked the best he has all spring. He will pitch batting practice in a few days, have another bullpen session, and if everything goes well, pitch at least an inning in next week’s Freeway Series against the Los Angeles Angels.

“He looked just like the Clayton of the past,’’ said Austin Barnes, who caught Kershaw’s bullpen session. “Really, no difference at all. He was very good.’’

Still, Kershaw will leave Phoenix without having thrown a single pitch in a spring-training game.

And no one, including Kershaw, seem the least bit worried.

“We do a very good job of taking the long view and expecting to play through October,’’ Roberts said. “To have the depth that we have certainly makes it a lot easier to bear.

“You lose any one our guys for any amount of time, and with Clayton specifically, we’ve done it before when we had to keep going without him. That’s very difficult to do. Having done it before makes the guys in the clubhouse feel like we can weather it. But there’s no question we’re a much better ballclub when he’s in the rotation.’’

The Dodgers have become almost immune to being without Kershaw, who turns 31 on Tuesday, for a full season. He hasn’t started more than 27 games, or pitched more than 175 innings since 2015. He has been on the injured list five times in the last three seasons, mostly with back injuries.

“Does he want to be healthy, and active, and not have this conversation? ’’ Roberts said. “Absolutely. He wants to be healthy and knows he can really help us when he’s healthy. It’s been very trying as far as the physical side.

So are the Dodgers.

You’ll be seeing them in October.

This time, with perhaps the freshest rotation in all of baseball.