The debate is on.

Last year’s No. 1 seed race was quite boring, with four essential locks for top seeds squared away before the NCAA committee revealed the bracket to the country on Selection Sunday.

This year is much different, with a close battle between North Carolina, Tennessee and Gonzaga for the final two No. 1 seeds. Duke and Virginia are locks for top No. 1 seeds, with the Blue Devils’ two wins over the Cavaliers the deciding factor in being the NCAA tournament’s top overall seed.

Here’s a look at the four projected No. 1s and their NCAA tourney credentials:

1a) Duke: The Blue Devils (29-5) were in jeopardy of falling to the No. 2 line for a brief period when Zion Williamson was recovering from a minor knee injury. Duke went 3-3 during that span, but Williamson’s return in the ACC tournament fortified Duke’s standing as the best team in college basketball. This season, they won two huge games over fellow top seed Virginia, with credentials punctuated by a No. 3 NET score and the country’s second-best strength of schedule.

2a) Virginia: Had the Cavaliers (29-3) not lost to Duke twice, their profile likely would’ve given them the top overall seed for the second year in a row. Virginia’s got the best NET score, a top-25 strength of schedule and 12 Quadrant 1 (top-30 home, top-30 neutral, top-75 away) wins. Plus, its three losses (the other one vs. Florida State in the ACC tourney semifinal) were all to Quad 1 opponents. 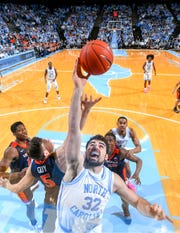 3a) North Carolina: The Tar Heels (27-6) have the most losses and worst NET score of the No. 1 seeds but their 10 Quadrant 1 wins included two victories over Duke when Zion Williamson was hurt and a one-point loss in the ACC tourney semifinal with Williamson in the lineup. UNC’s resume is helped by a Dec. 15 win over Gonzaga coupled with the third-best strength of schedule.

4a) Tennessee: A close call for the committee, the Volunteers (29-4) get the nod over Gonzaga based more Quad 1 wins (9 to 4) that included Saturday’s SEC tournament semifinal victory over a great Kentucky team. If the Vols don’t beat Auburn in the SEC final Sunday, there’s room to fall to the No. 2 line. Gonzaga’s West Coast Conference tournament final loss to Saint Mary’s ultimately created an opportunity for a team like Tennessee to vault ahead because the Vols’ losses were all against top-6 projected seeds.

Follow Tiger Woods’ final round of the Players Championship, shot by shot