What I’m Hearing: USA TODAY Sports’ Dan Wolken spoke with people around the basketball world and they had a lot to say about rising star Zion Williamson.
USA TODAY

NASHVILLE – We get so caught up in the results at this time of year, the ramifications, the bubble, the seedings, the bracketographers or whatever they’re called, that we sometimes forget to look at what’s right in front of us.

Tennessee and Kentucky played one of those Saturday at Bridgestone Arena, an SEC Tournament semifinal so good, so intense, so emotional, so loudly appreciated by the fans of both teams that it kind of felt like nothing else mattered.

If you were in the building, you know exactly what I mean. If you were watching on TV, hopefully you got some idea of how special this was. If you want to take the outcome and apply it to how either of these teams will do in the big tournament to come, don’t bother. Both are mentally and physically capable of staying in it for a long time. And it is powerful enough to eject anyone at any time — that’s part of why we love it.

So just enjoy this sucker for a second, OK? 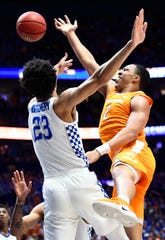 There are consequences for both teams after an astounding 18-6 Tennessee run in the final 2:45 of play, giving the No. 3 seed Vols an 82-78 victory and a spot in Sunday’s championship game against No.  5 seed Auburn. Rick Barnes’ team (29-4) will go for the program’s first SEC Tournament title since 1979, and this puts Tennessee in position for its first NCAA tournament No. 1 seed ever as well, when the bracket is unveiled Sunday evening.

This program is 4-2 against Kentucky in the past two seasons.

John Calipari’s Wildcats (27-6) likely have to settle for an NCAA No. 2 seed, and this also might allow UT to start closer to home next week (Columbus, Ohio?) while UK gets shipped to a more distant location (Jacksonville, Fla.?) This sure doesn’t cast doubt on the Wildcats’ potential to reach the Final Four in Minneapolis. They’re good enough, as are the Vols, who will be trying to advance to the game’s biggest stage for the first time in school history.

Those are the results and consequences. The elation was in the moment. Lamonte Turner was mobbed by teammates after the final horn. UT stars Grant Williams and Admiral Schofield embraced a few feet away, after sharing a sincere hug apiece with Kentucky star P.J. Washington. They all looked exhausted, and they should have been, based on how it felt to watch that frantic finish.

This game flipped because Williams (20 points) decided to take it over, fouling out Reid Travis — the guy he supposedly couldn’t dominate. And because Lamonte Turner used his hounding defense to force a crucial turnover. And because Turner hit what proved to be the game-winning shot, a long three with 30 seconds left on a pass from Schofield (21 points).

This after Washington (16 points) put back his own miss to go up a point, which came right after Williams buried a corner three on a perfect drive and kick from Jordan Bone (18 points, five assists). After Turner’s decisive three, Washington missed twice. Bone grabbed the rebound. He made the clutch free throws to clinch this thing in his hometown.

Got all that? Hopefully you saw it and recorded it and don’t need it retold. It’s a keeper.

It was a battle of virtual equals, in an environment that was not equal. Kentucky fans occupied about 70 percent of an arena that was stuffed past 100 percent, and that’s actually a credit to the Vols fans who managed to carve out as much space and make as much noise as they did. Neutral environments can be sterile and spacy in March, but this had the feel of a cage match.

It was big play one way, roar. Big play the other way, responsive roar. And for the first 34 minutes of the game, neither team made a significant run. The lead went back and forth and never exceeded five points either way.

Eventually, UK appeared to be in charge, fouling out Kyle Alexander midway through second half and getting easy buckets off Tennessee mistakes. It was 72-64 with 2:45 left and the usual SEC sight each March — the Wildcats in the title game — was at hand.

Then the Vols stole it with every bit of frantic energy and heart they could summon. Special, historic things may await Tennessee and its fans in the weeks to come. But Saturday at Bridgestone Arena? That one, the performance and the scene, will be hard to top.