Playing without injured star Kevin Durant, the Warriors bounced back after a loss to Phoenix on Sunday and avoided being swept by Houston after the Rockets won the first three meetings this season.

Golden State, which had lost six of 10 overall, is 4½ games ahead of Houston atop the Western Conference standings. The Rockets are tied with Oklahoma City for third place behind Denver.

After trailing by 14 in the fourth quarter, a three-point play by Chris Paul got Houston within one with 10.8 seconds left. Stephen Curry made two free throws with eight seconds remaining to make it 106-103, and James Harden hit one of two from the line at the other end with 6.4 seconds to go. The miss on the second one bounced high off the rim and was rebounded by Andre Iguodala, securing Golden State’s victory. 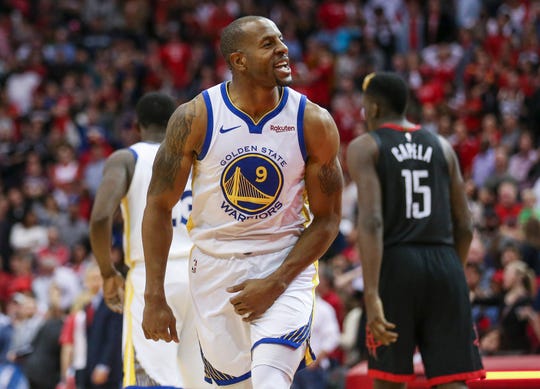 Thompson added a basket for the Warriors before the Rockets used a 6-0 spurt to cut the lead to 104-100 with 47.7 seconds left.

Thompson made five 3s to give him 203 this season. He joined Curry as the only players in NBA history to have seven straight seasons with 200 3-pointers.

Golden State had a seven-point lead to start the fourth and scored the first seven points of the period, highlighted by a 3 from Thompson, to push the lead to 92-78.

The Warriors were up by 12 in the first half but Houston cut it to 54-52 by halftime. A 3-pointer by Gordon gave the Rockets their first lead early in the third quarter and one by P.J. Tucker seconds later made it 60-56.

The game was tied later in the quarter after a three-point play by Paul before the Warriors used a 9-2 surge to take a 76-69 lead with about five minutes left in the third. Curry had five points in that stretch.

Golden State was up by nine soon after that, before the Rockets got two 3-pointers from Gerald Green to power an 8-2 run that cut the lead to 81-78 with two minutes left in the quarter.

But the Warriors scored the last four points of the period to extend the lead to 85-78 entering the fourth.

Warriors: Curry needs six points to become the fifth player in franchise history to reach 16,000 points. He made just three 3-pointers, ending a streak of 12 straight games with at least four – which was second in NBA history behind a 13-game streak by Harden this season. … Cousins added eight rebounds and a season-best seven assists.