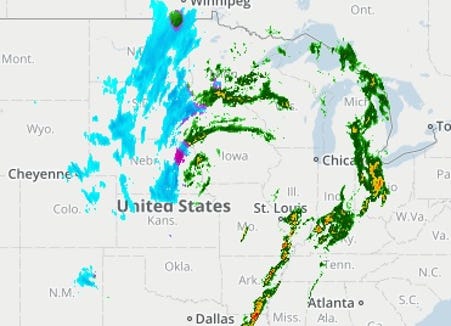 Air travelers faced another day of weather-related flight disruptions on Thursday thanks to a powerful “bomb cyclone” moving through the Rockies, Great Plains and upper Midwest.

Flights had been halted at several airports Wednesday because of the storm. By Thursday morning, however, flights were resuming at some airports.

The busiest among those affected was Denver, where the airport tweeted overnight that “4 of our 6 runways are now open” and said crews continued working to clear snow from the others.

In South Dakota, the Rapid City airport was among those forced to halt all flights Wednesday as the storm brought blizzard conditions to the area. The airport’s flight tracker showed a number of flights were set to resume today, but Thursday travelers faced lingering disruptions from the storm.

Nationwide, more than 1,150 flights had been grounded and another 570 delayed as of 8:20 a.m. EDT, according to flight-tracking service FlightAware. The majority of those cancellations appeared to be tied to the storm.

That follows Wednesday’s disruptions, when more than 2,075 flights were canceled and nearly 4,000 delayed. Again, most of those cancellations were tied to the storm, though other issues – such as poor weather elsewhere and lingering operations issues at Southwest – likely added a few dozen others.

For Thursday, Denver again remained the epicenter of cancellations. About 675 combined arrivals and departures had been canceled as of 8:20 a.m. EDT, which – by FlightAware’s calculation – accounted for about a third of all the day’s flights there. More than 80 percent of the airport’s flights were canceled Wednesday.

Schedules were likely to improve throughout the day Thursday, but travelers flying through the region should be prepared for another day of uneven operations.