Coach Roy Williams has called Duke freshman standout Zion Williamson the “full package” and an “incredible physical specimen” among other compliments. Well, his Tar Heels get a chance to see the projected No. 1 NBA draft pick up close for the first time Wednesday (9 p.m. ET, ESPN) in Durham.

The Blue Devils (23-2, 11-1) are leading the challenging ACC, having built up an NCAA tournament résumé worthy of the top overall No. 1 seed. That could change with the Tar Heels (20-5, 10-2) facing their archrivals with much to prove — in both the conference title race and as a currently projected No. 2 seed in USA TODAY Sports’ latest NCAA bracketology.

This is the first of two late-season matchups between the two teams with UNC hosting Duke in the ACC finale for both teams March 9. 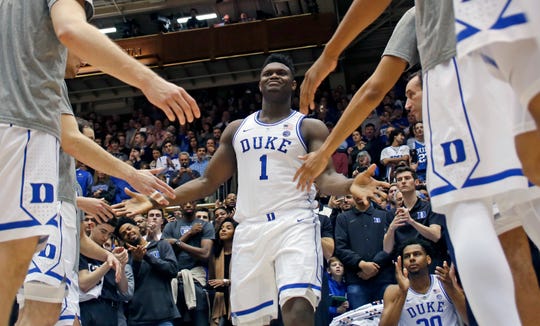 Duke’s Zion Williamson (1) is greeted by teammates as he is introduced before the start of a game this season. (Photo11: Chris Seward, AP)

Who wins? What are the keys to the game? Our experts weigh in:

► THE REASON: Yes, Duke is the favorite for many reasons and R.J. Barrett is coming off a triple-double performance but UNC has the ingredients to stage an upset. North Carolina can score and that’s half the reason they’ll be in this game. And while much of the focus has been put on who can stop Barrett or Zion Williamson, not much has been said about UNC’s interior strength (the ‘Heels are one of the best rebounding teams in the nation) that complements its three-point marksmanship much better than Duke’s.

Nassir Little, a 6-6 athletic freshman, will be the X-factor in this game. He’s got the length to guard Duke’s freshman superstars better than most teams. The point guard duel between UNC’s Coby White and Duke’s Tre Jones will also be critical. The two teams that have beaten Duke — Gonzaga and Syracuse — forced the Blue Devils to beat them from the outside by playing zone and containing their scoring in the paint. It will be key for UNC to do the same thing if it wants to control the tempo and discomfort a usually too-comfortable Duke squad.

Nate Scott, For The Win

► THE REASON: This game will be closer than people think, and UNC is (somewhat) quietly building one of the best offenses in college basketball, with the No. 2 scoring offense in the country. But they’re leaky on defense and I’m not sure who on their roster will stop dominant Duke freshman Zion Williamson, let alone his classmates R.J. Barrett and Cam Reddish

► THE REASON: Everyone knows about Zion Williamson and Duke’s freshman core, but don’t overlook the defense in this one. The Blue Devils are currently leading the country in blocks per game by a wide margin and rank fourth in the nation in both steals per game and adjusted defensive efficiency. They should be able to lock down North Carolina at home.

► THE REASON: It isn’t just Zion Williamson and R.J. Barrett that makes Duke so difficult to beat. It’s the contributions of defense and playmaking from Tre Jones and the clutch shooting from Cam Reddish. Such is the challenge for North Carolina when it visits Durham. The Tar Heels are playing their best basketball of the season with eight wins in their last nine game. But this looks to be too high of a mountain to climb unless the trio of Cameron Johnson, Coby White and Luke Maye are all on the top of their game.

► THE REASON: There’s no doubt that the brand of basketball North Carolina likes to play is aesthetically pleasing. They love to push the tempo and get lots of transition buckets. The problem for the Tar Heels is, that’s a game Duke doesn’t mind playing, either. And the Blue Devils have the athleticism to get back on defense and the rim protectors to make life difficult, even for UNC’s talented big men. I think Duke takes round one in Cameron in a high-scoring affair.

► THE REASON: I don’t think this one will be close. At all. Sure, UNC can score just as well as Duke — if not better — but the Tar Heels simply won’t be able to get enough stops against the Blue Devils. While all the attention will be on the law firm-sounding freshman trio of Williamson, Barrett and Reddish, I wouldn’t be surprised to see one of Duke’s role players like Tre Jones, Javin DeLaurier or Jack White have a big game. Plus, the Blue Devils are 5-1 at home this year, winning by an average of 15 points per game inside the friendly confines of Cameron Indoor.