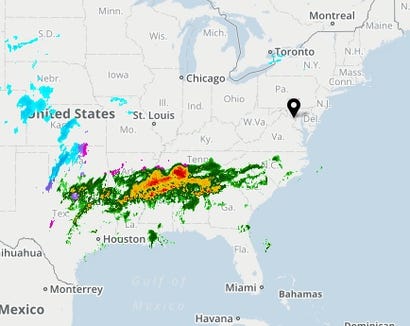 Airlines are canceling flights and expanding their rebooking waivers ahead of a new winter storm that looks increasingly likely to disrupt flights at airports from the Great Plains into the Northeast.

More than 275 flights had already been canceled for Wednesday, flight-tracking service FlightAware counted as of 12:40 p.m. ET on Tuesday.

Most of those preemptive cancellations were made by Southwest, which canceled more than 100 combined arrivals and departures at Baltimore/Washington and another 85 at Chicago Midway. The airports are the busiest two in Southwest’s entire network based on the number of daily departures.

Though both airports were expected to see wintry weather, Southwest’s cancellations for Wednesday came as it was already experiencing a relatively high rate of cancellations in the days before the storm’s approach. The airline last week declared an operations emergency after an unusually high number of aircraft were taken out of service for last-minute maintenance work.

On Tuesday, for example, Southwest had canceled more than 180 flights, or 4 percent of its schedule, more than any other carrier as of 1:20 p.m. ET, according to FlightAware. American and United, in contrast, each had roughly two dozen cancellations (including regional affiliates) as of Tuesday afternoon.

That was on top of 84 Southwest cancellations on Monday and 112 on Sunday.

Still, the cancellations were being made amid a forecast of wintry weather across the upper Midwest, Great Lakes and parts of the Mid-Atlantic and Northeast on Wednesday. A mix of snow and ice was possible at many busy airports in the region. Up to a half foot of snow was possible around Washington and Baltimore, though the precipitation was expected to end as rain there amid rising temperatures.

American, Delta and JetBlue rolled out change-fee waivers on Wednesday while Southwest and United expanded ones already in place.

For now, Delta’s covered Wednesday travel to nine airports from the greater New York City area south through Philadelphia and into Baltimore and Washington.

United, which had been waiving change fees for Tuesday flights to Chicago O’Hare, expanded its policy to include nearly 50 airports. United’s policy covered Tuesday flights to 10 airports in the Great Plains and Wednesday flights to the others, which spanned from Minnesota and Wisconsin east to Pennsylvania, Maryland and Virginia.

Southwest had two policies, one covering the “Midwest” and the other the “Ohio Valley and Northeast.” More than two dozen airports were included, with either Tuesday or Wednesday flights covered depending on the city.

American’s waiver focused on the Northeast, covering 11 cities — including its hubs at New York JFK and Washington Reagan National.