SportsPulse: With another NBA All-Star Game in the books, Trysta Krick and Jeff Zillgitt turn our attention to the playoff push down the stretch.
USA TODAY

Love or hate his style of play, there’s no denying that James Harden is on a historic scoring binge.

After scoring 42 points in the final game before the All-Star break, the Houston Rockets star has now scored at least 30 in 31 consecutive games. Harden’s streak is the longest since the NBA-ABA merger in 1976-77 and tied for the second-longest all-time.

Wilt Chamberlain is the only other player in NBA history to score at least 30 points in 31 consecutive games. The legendary center had two such streaks in the early 1960s, including an all-time record 65 consecutive 30-point games during the 1961-62 season.

The game is very different now than in Chamberlain’s day, so it’s incredibly difficult to compare eras. The 3-point line that Harden and his contemporaries have used to transform the game wasn’t instituted in the NBA until the 1979-80 season — seven years after Chamberlain retired. 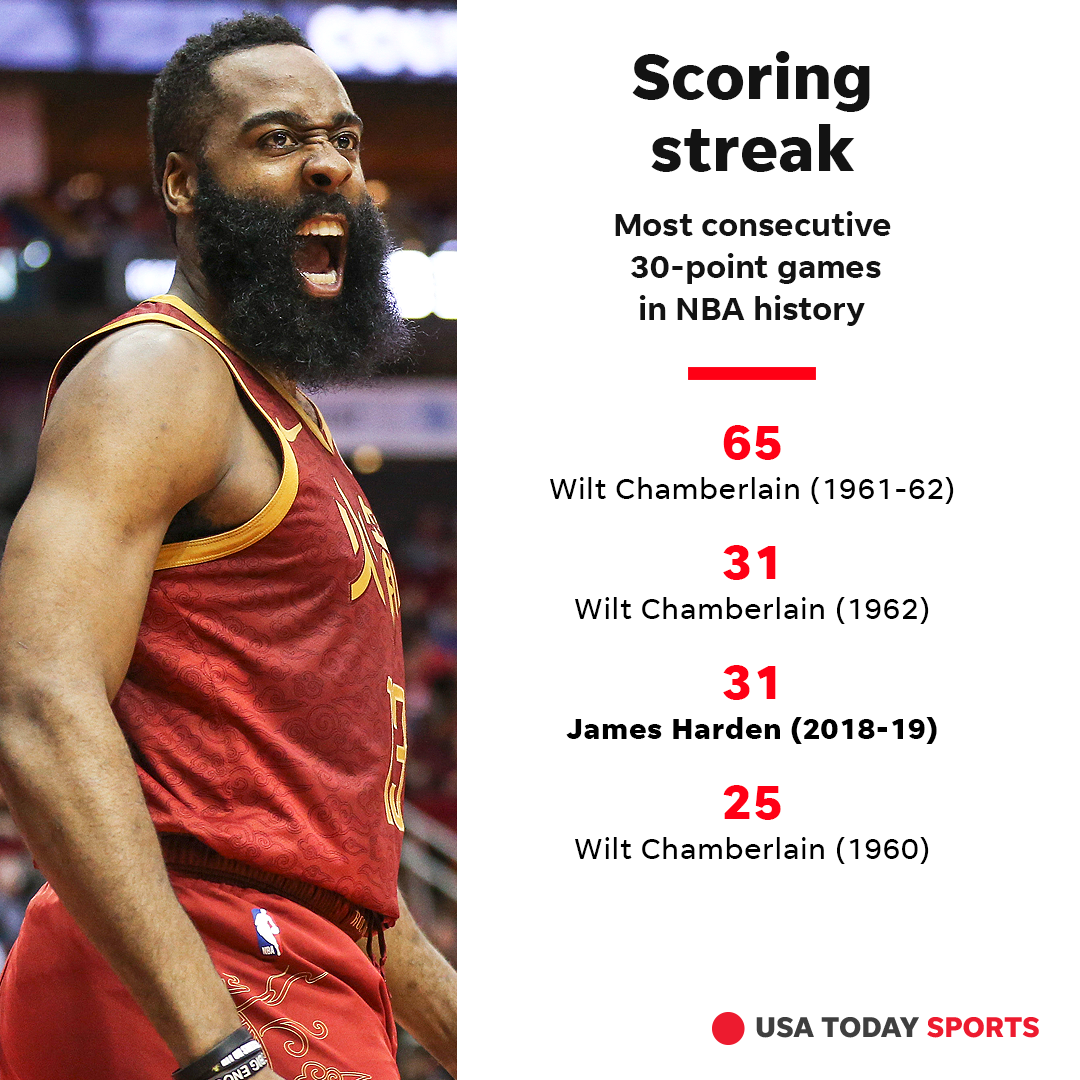 Rather than compare Harden’s streak to any of Chamberlain’s, or debate whose scoring run is more impressive, let’s simply take a moment to marvel at Harden’s dominance. Here are some eye-popping numbers from a scoring tear the likes of which we haven’t seen in over half a century:

► The reigning MVP has scored at least 40 points 18 times during his streak and 22 times overall this season. Anthony Davis and Steph Curry are tied for second in the league this season with seven 40-point games each.

► Harden has poured in over 50 points four times during his run (five total this season). Eight other players have scored at least 50 in a game this season, and none have done it more than once. With 57 and 58 points in consecutive games Jan. 14 and 16, Harden joined Chamberlain as the only players in NBA history to score at least 55 in back-to-back games.

► The most polarizing aspect of Harden’s game is his ability to draw fouls and get to the free-throw line. He’s led the league in free-throw attempts in each of the last four seasons and five of the last six. Over the last 31 games, Harden has attempted 404 free throws (13 per game), which would rank fifth in the league. Overall, Harden leads the NBA in free throws attempted (620, 11.5 per game) and made (540, 10 per game).

► The only number that surely matters to Harden is the Rockets’ record. Houston is 21-10 in the last 31 games to improve to 33-24 overall. During Harden’s streak, the Rockets have moved from 14th place in the Western Conference to fifth.