The NBA All-Star game returns to Charlotte after a controversial relocation in 2017 due to North Carolina’s bathroom bill. So the question is, was the time right for the NBA to return?
USA TODAY

The NBA landed itself a public-relations slam dunk, especially among social justice supporters, when in 2016 it stripped Charlotte of the All-Star Game.

The perception of the move to bring it back this weekend? Far less certain, and much thornier.

On the surface it would seem like another win. The NBA was among many other business — including the NCAA — to pull trade from North Carolina in the wake of the much-maligned House Bill 2 (HB2) legislation.

HB2, implemented in 2016, curtailed the ability of individual cities to enact anti-discrimination policy and controversially barred transgender people from using the bathroom corresponding to their preferred identity.

The league said it wouldn’t return until the law was changed. Under heavy pressure, HB2 was repealed and replaced. And so, the NBA said it would make good on its promise. But it wasn’t that simple.

“I think it is disappointing that the NBA is returning the All-Star Game to North Carolina, even though the discrimination has been maintained in many respects,” Chase Strangio, a staff attorney for the ACLU, told USA TODAY Sports. “It was great that they took that stand in 2016 and hopefully they can be more consistent in their opposition to these discriminatory measures moving forward.”

The position of Strangio is that the replacement bill, HB142, has offered little in the way of a satisfactory solution. While the headline provision regarding bathroom usage has been altered, the new rules have been described as offering inappropriate protection to at-risk groups.

It has put the league in a tough spot, as opinions will always differ as to just how far the social responsibility of a sports league should reach, especially in these times when splits in political opinion have rarely been wider.

A sampling of fans in Charlotte this week seemed satisfied with the NBA deciding to bring the event back to the city in the wake of the policy shift, with some reservations.

“It’s a tricky game for them because, I mean, this is Michael Jordan’s hometown,” said Kahmakreeah Lofty, a business strategist visiting from Atlanta. “So I think they wanted to come back here anyways, so they were just looking for something to come. I’d say maybe it’s enough to come back. I don’t know. I think it’s more of a political thing.”

Lofty’s husband Mohamed, a fifth-grade teacher, agreed. “I think the NBA does more than most leagues in taking a social stance,” Lofty added. “I think they did the right thing by moving the game. They shouldn’t have punished the city of Charlotte once they corrected themselves.” 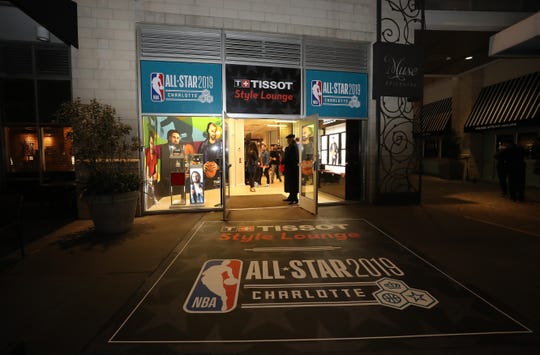 Charlotte prepares for the All-Star Game that was originally scheduled to be played in the city in 2017. (Photo11: Streeter Lecka, Getty Images)

Advertising executive Andrew Freeman, who traveled with family members from Bloomington, Ill., to watch the game, commended the NBA for “being on the forefront of major sports organizations” in regards to the league’s 2016 action. “I applaud their efforts of basically pulling out of Charlotte until they got that resolved.”

Kendra Johnson, executive director of Equality North Carolina, says she doesn’t believe the issue really got fixed at all, but is at ease with the NBA coming back.

“I don’t think the NBA thinks (HB142) was a perfect bill and the LGBTQ community knows it was devastating,” Johnson said. “The reality for me is I would much rather have allies in the state who are here bringing business and employing LGBTQ people and continuing to fight for equality than to not have those allies in the cities.”

Certainly the NBA is at pains to avoid its return to North Carolina as being seen as an endorsement of HB142 and has implemented a range of measures. Charlotte Hornets president Fred Whitfield lobbied against HB2 and the Spectrum Center has a policy enforcing “freedom” of choice for spectators.

As part of its schedule of events for the week, the league is staging three separate LGBTQ-equality themed conversations and forums in a bid to raise awareness — and to make its position clear.

“We felt the partial repeal didn’t go as far as we would have liked it,” NBA president of social responsibility Kathy Behrens said. “But we felt it was enough of a change for us to bring it back. This also gives us the chance to demonstrate our values and show how inclusive and diverse an All-Star Game can be. Maybe by being here we can build some bridges.”