Kevin Durant is angry again, because, well, it’s been a minute.

As KD-to-NYC in the summer continued to feel more and more like a done deal, Durant broke his week-long media silence Wednesday night. And, in doing so, showed a sensitivity that makes you wonder whether America’s toughest and most intriguing sports town would be the right destination for him after all.

“Who are you? Why do I got to talk to you? Tell me. Is that going to help me do my job better? I didn’t feel like talking.”

Mock draft: How the NBA All-Star Game roster might look

The speculation cycle long ago started spreading the news that Durant likely was to show up in old New York this summer, once his current Golden State Warriors deal expires. On the surface, there are some reasons to suggest that  would be a good fit. 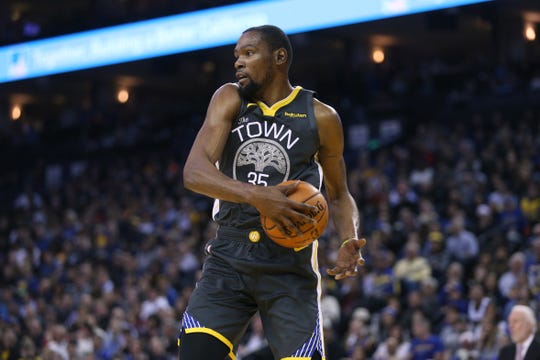 Durant could find himself a truly beloved adopted son of the city, especially if he was able to lead the Knicks out of a slump that has lasted a generation and seen the team win just one playoff series since 2000. They haven’t made the postseason in five years. Most of their fans have not been alive to see a title. They just traded their best player, Porzingis, to the Dallas Mavericks. It’s ugly. A savior is needed, in the worst way.

The Porzingis trade looked directly targeted at clearing space for Durant and another big star – Kyrie Irving is the dream target – in what would be the perfect antidote to the criticism Durant received for choosing the rampant Warriors last time he switched teams. Royal Ivey, one of his best friends, is a Knicks assistant. Rich Kleiman, his business partner, is a passionate and connected Knicks fan. Knicks general manager Scott Perry was on the Seattle SuperSonics when they drafted Durant in 2007. If Durant goes to New York and wins, he becomes an instant legend.

Yet unless he toughens up a bit and is able to let media slights slide on by, it could turn into a match made in Hell’s Kitchen.

The New York media market is a tough place, whether you are a shining superstar or a battling role player, and no matter which of the major team sports you play. The Big Apple has had great sporting success, but also far more heartbreak and disappointment than it would like, stretching back decades.

Combine that with some of the most passionate sports fans in the country, plus that famed New York penchant for straight talking, and the outlets that cover teams such as the Knicks are a reflection of their city.

As ever, the healthiest thing for an athlete in such a market is to ignore all the noise. But Durant is smart and inquisitive. He reads, and he often doesn’t like what he reads. Making an enemy of the New York media, however, no matter how big you are, sounds like a particularly miserable way to spend a couple of years.

“Let us play basketball, that’s all I’m saying,” Durant added on Wednesday, in what was the more ironic part of it all.

For he has never shown any inclination to keep things just about basketball. Not when he has riled at any perceived knock on Twitter, possibly from a fake account. He never met a petty online beef he didn’t like the taste of.

He didn’t keep it just about basketball when he stared down Rihanna at courtside of the NBA Finals two years ago, nor when he unloaded on the situation surrounding LeBron James and why the Lakers may have trouble getting other players to join him in the L.A. media market. He called the environment “toxic” during a Bleacher Report interview last year.

If he is this sensitive he might like it better in L.A. While the New York media is thorny and uncompromising and the Bay Area crowd is not to his liking, the Los Angeles basketball press, at least toward James, has been downright deferential.

However, if Durant, as it seems, cares about his legacy and wants to be seen as the best player in the sport, the Knicks would offer him the biggest chance of all to cement a unique twist to his Hall of Fame career.

His basketball ability speaks for itself, and as long as there are some solid pieces around him, then there is no reason why a move to New York wouldn’t turn into a rousing success that catapults the flailing team into an instant contender.

No reason except Durant himself, his mindset, and whether he would be willing to shut down his habit for railing at situations beyond his control. As ever Kevin, in New York, New York, it’s up to you.