What I’m Hearing: Bob Nightengale breaks down some of the proposed rule changes by the MLB including a universal DH and a pitch clock.
USA TODAY

Evolution is inevitable, and good, and that can even apply to baseball.

Change once came in drips, but two decades of innovation on the backfields and batting cages and boardrooms has flooded the diamond.

A bevy of significant rule changes – oft discussed, but often not long for the negotiating table – are being batted about by MLB and the players’ association, a list of bullet points that go far beyond limiting mound visits or telling pitchers to hurry it up a bit.

No, what’s on the table right now would, to borrow a turn of phrase from Manfred, render extinct significant elements of baseball as we know it.

Pitchers hitting? Not in the universal DH era.

Lefty-on-lefty matchups? Not if pitchers are required to face at least three batters.

A timeless game without a clock? Nope – you better release that pitch in 20 seconds or less.

There’s a fine line between innovation and change for change’s sake, of evolution and overreach based on current conditions.

There’s a lot of smarts in these proposals, which were first reported by The Athletic. And there’s also a Pandora’s box of unintended consequences. Let’s try to parse them out:

Unless you’re 55 or older, you have no solid recollection of a world without the designated hitter. If this sounds like a gentler way of saying the most strident opponents of the DH are dying off, well, you’re probably correct.

It would certainly be a drag to see what we’ve come to know as the National League style of play vanish. And the universal DH will almost assuredly tack time onto the game, as one more Three True Outcomes slugger will grind out lengthy at-bats where a pitcher once quietly and quickly flailed.

Still, it’s not like the National League has lapped the American in time of game; in the past four seasons, just 19 of the 37 teams whose games ran the longest hailed from the AL. Length of game seems to correlate more strongly with whether a team is in contention – and thus, more deliberate in its actions.

The union will certainly not object to a bevy of higher-paying jobs getting created, and it would enable guys like Mark Reynolds to sign actual, major league deals rather than the boiler plate (collusive?) minor-league deal with a $1 million guarantee should he make the team. (Reynolds, it should be noted, has produced an .821 OPS the past three seasons while getting paid between $1 million and $2.6 million).

So, the double switch will die. There will also be more home runs, and a slot in the lineup for marquee players who might otherwise take the day off altogether. We can live with that. 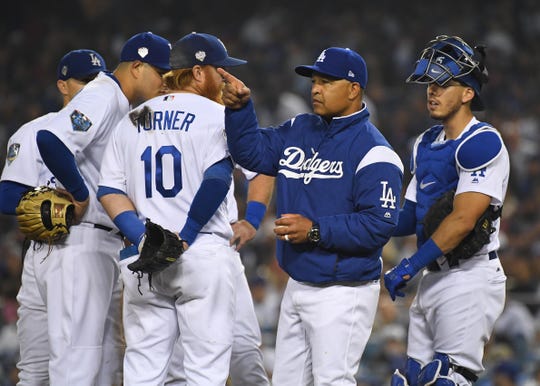 Sure, nobody has enjoyed the Creeping La Russaism that has infected baseball since the legendary manager revolutionized the use of lefty specialists and exhaustive matching up.

Yet, it’s also undeniably been part of the game going on four decades. Like the DH, it has created a specialized line of work for a largely decent bunch of human beings.

And, much like the talk of limiting shifts that has gotten many up in arms, it goes against everything baseball stands for to legislate legitimate strategy out of the game.

Then again, if nobody’s still up at 12:30 a.m. when the ninth pitcher of the night records the final out, perhaps baseball does have a problem.

So here’s a less extreme solution: Allow one La Russa Voucher per game.

If it’s late September, and the Red Sox and Yankees are vying for a division title, and it’s a 2-1 game, and Aaron Boone has been dreaming all night of sticking Zach Britton on Andrew Benintendi, should we really force Britton to face J.D. Martinez, too, when a rested Dellin Betances is ready?

To eliminate that option seems like overreach. At the same time, limiting that option would create even more strategy.

Hey, if the Brewers want to pull some Wade Miley shenanigans in the playoffs – cool. But they’re out of luck if they want to match up in the later innings.

Perhaps most important, the LOOGY will live forever. And too many of us devoted far too much time learning how to properly spell Rzepczynski.

As you watch the NFL or any baseball game and see every replay tortured and analyzed from every angle, have you ever asked yourself, “You know, we could really use more regulations in sports.”

Do you live for baserunners making the earphones gesture above their head, begging for a replay? Wide receivers making the flag motion whenever they were breathed on?

Well, imagine a pitcher releasing a pitch 20.3 seconds after the pitch clock started. Would the opposing manager, the batter, a baserunner point at the clock as if a major injustice occurred?

Would a replay review be required, or would a buzzer in the umpires’ pocket be judge, jury and pitcher-cutioner?

Certainly, pitchers can work more quickly. Not surprisingly, the 26 slowest workers in 2018 were all relievers – they pitch in the tensest moments of the game and throw harder, requiring more recovery time between pitches.

But you also can’t expect pitchers merely to catch and release. Of the 336 pitchers who threw at least 50 innings last season, just three – Brent Suter, Steven Matz and that man Miley again – averaged less than 20 seconds per pitch. At the very middle of that group, the average pitch time was 24 seconds.

Can we honestly expect your standard pitcher to shave four seconds off his between-pitch routine and not be affected? Would the mere existence of the clock not somehow distract and detract from fan, pitcher and batter experience?

Not everyone is Pedro Baez or Bud Norris. So rather than punish everybody, throw the book at the most chronic offenders – those who average 27 or more seconds between pitches.

Fine them. Put them on the clock – or threaten to do so. Forcing everyone to alter their behavior merely to shave seconds has both competitive and aesthetic ramifications.

Who knew that a quarterback not much taller than David Eckstein could roil an industry in the manner Murray has? The Oakland A’s relatively sure gamble on allowing Murray a year in college football blew up spectacularly when he won the Heisman Trophy and now everybody’s scrambling.

Here’s a thought: Chill out a bit.

If there’s one overriding factor in the Murray case, it is desperation. The A’s look desperate to recoup a valued ninth overall pick. MLB looks desperate to retain an elite athlete it may lose to football.

Trouble is, no one really knows if Murray can so much as hit Class AA pitching.

Other than considerably sweeten the ante, there’s little baseball can do to prevent Murray from the NFL if the league consensus is he goes in the first half of the draft. So what if the A’s back up the Brinks truck, and MLB creates a rule to possibly avert future situations, and he’s little more than a fourth outfielder?

Meanwhile, they’d have instituted a rule that may only create further loopholes and headaches.

A Murray, a Drew Henson or a John Elway don’t come along as often as we’d think. Baseball doesn’t need to bend over backward to cater to them.

As it stands, the game already looks plenty worried.