After multiple delays, Southwest Airlines will begin its first test flights to Hawaii on Tuesday.
Time

Southwest Flight 8725 marks the return of the aircraft that the carrier flew from Oakland, California, to Honolulu a day earlier. That flight, Southwest’s first to the state of Hawaii, operated as a proving flight as part of Southwest’s effort to secure the “ETOPS” certification it needs from the Federal Aviation Administration to operate long overwater flights with its two-engine Boeing 737 jets.

The flight had no paying passengers, only FAA representatives and Southwest pilots and employees helping with the certification effort. The Tuesday “validation flight” was focused on long-range navigation and communication procedures, part of the authorization process.

But that didn’t keep Southwest from greeting the flight with fanfare in a ceremony complete with Hawaiian leis and group photos. Even the Southwest Boeing 737 making the flight received a giant lei. 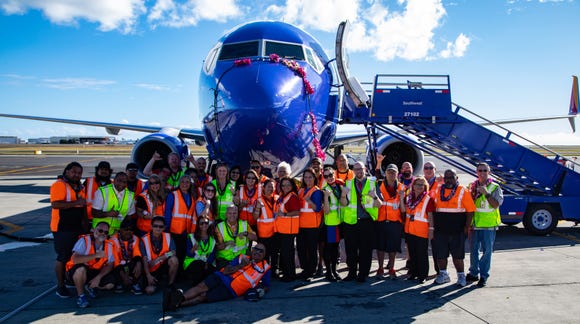 A Southwest Airlines Boeing 737-800 is seen in Honolulu with celebrating employees after the carrier’s first-ever touchdown in the Hawaiian Islands on Feb. 5, 2019. The flight was part of a certification effort needed to begin passenger service. (Photo: Southwest Airlines)

Southwest posted a picture of the arrival, showing its Boeing 737 with the iconic Diamond Head peak near Waikiki Beach rising in the background.

“You see that? That’s what it looks like when a Southwest bird lands in Hawaii!,” Southwest said via social media.

Now, Southwest is set to fly the plane out of Hawaii – and all the way back to Texas – as it continues its flight testing and certification process that it needs to complete before it can offer service to the state. 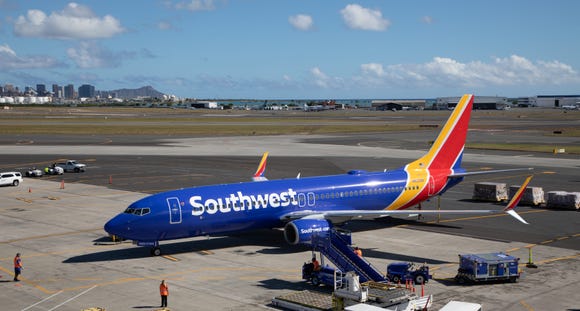 A Southwest Airlines jet is seen in Hawaii for the first time ever on Feb. 5, 2018, after the Boeing 737-800 landed in Honolulu as part of the carrier’s authorization process with the FAA to offer future scheduled service to the state. (Photo: Southwest Airlines)

While Boeing 737s regularly fly between Hawaii and the U.S. West Coast, the nonstop to Texas is an unusually long flight.

“The validation tests are conducted in the airspace between Hawaii and the mainland,” Southwest spokesman Brian Parrish said to USA TODAY’s Today in the Sky blog. “Due to favorable tailwinds and a light aircraft load today, conditions are allowing us to fly the ETOPS 737-800 non-stop to our home at Love Field.”

You see that? That’s what it looks like when a Southwest bird lands in Hawaii!

Visit https://t.co/aOAa0lmiz7 to learn more about our plans to serve Hawaii. Stay tuned for more! pic.twitter.com/lbwT1CgQjr

For those looking to read the tea leaves, Parrish added that the flight to Dallas “does not indicate any service intentions beyond those we’ve already announced.”

Southwest has already announced where it intends to fly once its Hawaii service begins, saying it plans to offer routes connecting four California airports (Oakland, San Diego, San Jose and Sacramento) to four in Hawaii (Honolulu on the island of Oahu; Lihue on the island of Kauai; Kahului on the island of Maui and Kona on the “Big Island” of Hawaii).

When that service might begin is still in question.

ASK THE CAPTAIN: ‘ETOPS’and other aviation jargon and abbreviations explained

Southwest had already been in the process of securing its needed ETOPS certification, but the effort received an unexpected delay during the federal government shutdown that furloughed federal workers, including FAA inspectors.

Speaking during the airline’s earnings call in late January, Kelly said he expected his airline would be able to begin Hawaii flights approximately six to eight weeks after the FAA approval process resumed. Before the shutdown, he said, Southwest was aiming for a Feb. 1 startup, though it never publicized that target date.

He suggested then that if the shutdown ended within a week – which it did – the airline might be able to begin passenger flights by mid-March. One potential trouble spot, however, is that a deadline looms later this month for another possible shutdown.

For now, Southwest continues its efforts to secure the certification that would allow its 737s to fly between the U.S. mainland and Hawaii. The certification – short for “Extended-range, Twin-engine Operational Performance Standards” – is standard for airlines wishing to deploy two-engine aircraft on long overwater routes where diversion airports are scarce.

As aircraft technology has advanced in recent decades, the certification has become common. From the mainland U.S., it’s frequently used for widebody jets making long-haul transoceanic routes to Europe and Asia. For Hawaii flights, many U.S. airlines already have ETOPS certification to fly narrowbody planes to and from the state.

While many of its U.S. rivals already have the certification, Southwest’s effort to seek it is a recent development. Since its launch in 1971, the carrier flew only within the mainland United States for more than 40 years. But that changed in 2014 when Southwest began flying to several destinations in the Caribbean. It has since expanded its footprint to include Mexico and Costa Rica, but none of those flights require ETOPS certification. But, with the planned Hawaii service, Southwest has finally had to seek approval for ETOPS service.

TODAY IN THE SKY: Southwest’s first day of international flying is in the books (2014)

The Latest: Venezuelan man urges military to let in US aid

State of the Union 2019: How health care issues played into the president’s address