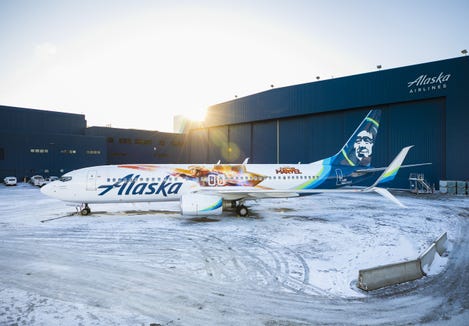 Alaska Airlines has added the comic-themed special livery in advance of the new “Captain Marvel” movie, which is to debut March 8. The special-edition paint scheme was unveiled Tuesday at Alaska Airlines’ hub in Seattle.

“We’re excited to showcase a pilot who’s risen to Super Hero status – an image that embodies strength and confidence and inspires future aviators across our expansive network to go further,” Natalie Bowman, Alaska Airlines’ managing director of marketing and advertising, said in a statement.

Cool design in celebration of new the movie coming out on 3/8 & International Women’s Day. pic.twitter.com/M98R4HpHTY

It’s not the first special livery to fly for Alaska. The airline has about two dozen special-edition paint schemes, ranging from turbo-props painted in the colors of western universities to 737s painted in Disney themes. In 2017, the carrier unveiled a new San Francisco Giants design for one of its Airbus A321s.

Among the more notable designs: