SportsPulse: Trysta Krick sits downs with Action Network’s Chad Millman for advice on which Super Bowl team to bet and which prop bet is a must.
USA TODAY

Big-money bets began to be placed as Super Bowl LIII kickoff approached, although the wagers placed by one person last week that garnered both attention and some worry among Nevada sportsbooks.

It is estimated that the same bettor won more than $10 million betting on the Philadelphia Eagles at Super Bowl LII. Bettor X would have earned more than $4.5 million with a Rams victory.

Typically, lower-scoring games benefit the sportsbooks. The over/under (total number of points scored) drifted downward in recent days, but was at 56 points at many major sportsbook. That meant 59 percent of those who placed — and lost — that bet at William Hill.

The majority of bettors, however, bet on New England, which easily covered the spread that was between 2.5 and 3 points in recent days.

“Overall a solid day,” according to Jay Kornegay, the Las Vegas casino’s VP of race and sports operations. “We lost on the game but did very well on the futures book.” 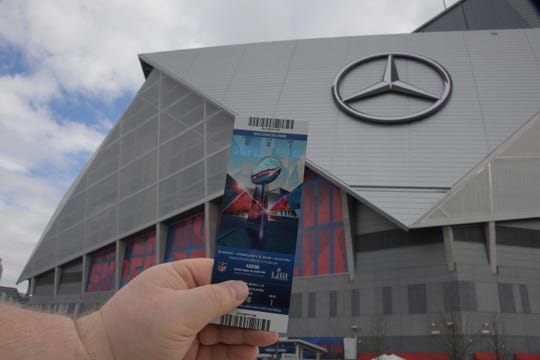 Super Bowl LIII betting is picking up as the start of the game approaches at Mercedes-Benz Stadium. (Photo: Kirby Lee, USA TODAY Sports)

“We had positive prop results,” Kornegay said. “We did take some hits on props we don’t normally pay out.

William Hill — which operates more than 100 sportsbooks in Nevada, along with others in states that took action on the Super Bowl for the first time in the wake of the Supreme Court’s decision in May — took in a pair of six-figure bets on Sunday ($580,000 on the New England Patriots at minus-2.5) and ($300,000 on the Rams at plus-2.5).

The largest wager made outside of Nevada taken by William Hill was at $60,000 bet on the Rams in New Jersey.

Westgate Sportsbook took a $110,000 bet on the Patriots hours before kickoff.

“It was pretty quiet leading up to today, but betting has definitely picked up,” Nick Bogdanovich, director of trading at William Hill U.S., told USA TODAY Sports about three hours before kickoff.

Kornegay said entering the weekend, about 75 percent of the bets the Westgate had taken had been on the Patriots. He noted that over the last couple days, the Rams vs. Patriots betting had evened out some.

If you love talking football, we have the perfect spot for you. Join our new Facebook Group, The Ruling Off the Field, to engage in friendly debate and conversation with fellow football fans and our NFL insiders.